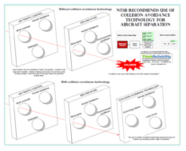 *This is the third in a series of 3 blogs.

Our previous two blogs detailed the cases of two mid-air collisions – one between a Cessna and an F-16 that collided in Moncks Corner, South Carolina, killing two (see blog) and one between a Sabreliner and a Cessna that collided in San Diego, California, killing five (see blog). The National Transportation Safety Board (NTSB) determined probable causes for both investigations were very similar; both involved failures of the air traffic controllers to resolve the conflicts.  Found to be contributing to both of the collisions was the “inherent limitations of the see and avoid concept of traffic separation”. The pilots of all the planes involved in the two collisions weren’t aware of the other aircraft until it was too late to prevent a collision (although the F-16 pilot did have time to successfully eject). None of the aircraft were equipped with traffic displays or alerts, so their ability to identify other craft in the airspace was limited to information being fed from the controller and that available visually.

As part of the investigation, the NTSB recreated the approximate visual fields of each of the pilots prior to the crashes. For most of the time leading up to the collisions, the pilots had limited and/or partially obscured views. The NTSB found that, although “the ‘see-and-avoid’ concept has long been the foundation of midair collision prevention”, “the inherent limitations of this concept, including human limitations, environmental conditions, aircraft blind spots, and operational distractions, leave even the most diligent pilot vulnerable to the threat of a midair collision with an unseen aircraft.”

In the Safety Alert, the NTSB recommends that pilots consider the use of technologies that aid in collision avoidance, and use the information from these technologies to provide separation from other aircraft before aggressive evasive maneuvers are required. These technologies are a solution to the problems associated with mid-air collisions, acting upon one of the causes generally resulting in these collisions – being unaware of traffic in the area. The use of air traffic control and the “see-and-avoid” concept are also solutions to mid-air collisions. However, like many solutions, they’re imperfect.

The Swiss Cheese model can be used to demonstrate the risk reduction provided by the various solutions that can be used to prevent an incident, such as a mid-air collision. Each solution can be considered a “layer” of protection. However, that layer isn’t complete. Instead of being a brick wall, it’s more like a slice of Swiss cheese – there are holes in the layer where the protection breaks down. However, when multiple layers of protection (or multiple slices of Swiss cheese) are used, the accident only occurs when the holes in all the slices line up. In this case, a mid-air collision only occurs when the “holes” in the layers of protection line up – when there’s an error by the traffic controller, and visual obstructions lead to ineffective “see-and-avoid” concept.

The use of collision avoidance technology adds another slice of Swiss cheese to the layers of protection. While the technology has its limitations – human use of information, technology failures, etc. – it’s another failure that has to occur (or hole to be lined up) in order for a mid-air collision to occur. Which means it’s still possible, but the risk has been reduced.