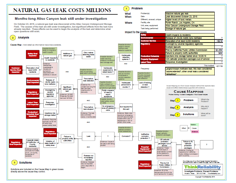 On October 23, 2015, a natural gas leak was discovered at the Aliso Canyon Underground Storage Field. The causes of the leak are still under investigation, but significant effects from the leak have already resulted. These effects can be used to begin the analysis of the leak and determine what open questions still exist.

The analysis of the leak can be performed in a Cause Map, or a visual root cause analysis. The first step in the Cause Mapping process is to identify and document the what, when and where of the problem, as well as the resulting impacts to the organization’s goals. In this case, the problem can be defined as a massive natural gas leak (what) that was discovered October 23, 2015 (when) at the Aliso Canyon Underground Storage Field at Porter Ranch, California (where). There were multiple impacts to the goals. The safety goal was impacted because of the health impacts (short-term and potentially long-term) to residents. The environmental goal is impacted by the release of approximately 94,500 metric tons of methane (the primary component of natural gas). At least 8,000 nearby residents were relocated, at an estimated cost of over $2 million, resulting in an impact to the customer service goal.

There are multiple regulatory impacts resulting from the release and associated issues, including oversight by several regulatory agencies, a $2.25M fine by the California Public Utilities Commission, and a $4M settlement for criminal charges for failure to properly notify authorities. There are also multiple ongoing lawsuits, from California, Los Angeles county, and thousands of area residents. The production/ schedule goal is impacted because injections into the storage field have been halted since October 25, 2015. 125 cathodic protection packages were found to be out of service during the ensuing investigation, which is an impact to the property goal. Additionally, the response and the required investigation impact the labor/ time goal. The costs to the operator have been estimated at over $717M, per their second-quarter 2016 earnings report. While this is the largest known methane leak, small leaks, such as the one suffered at Aliso Canyon on September 12, 2016 (just before the $4M settlement of criminal charges) are considered “ubiquitous”.

Beginning with an impacted goal, such as the safety goal, we can ask “Why” questions to develop a cause-and-effect diagram (the Cause Map). In this case, the safety goal is impacted due to the health impacts to residents. Known short-term impacts include headaches, nosebleeds and nausea, which are known side effects of exposure to the additives in natural gas used to make identifying leaks easier. (See our previous blog about the school explosion that led to the addition of odor to natural gas.) A study regarding long-term health effects was requested by Los Angeles County last month. The exposure to these additives resulted from the significant natural gas leak.

The volume of gas leaked was caused by the leak itself, the time before the leak was detected and the time before the leak was stopped. In this case, the cause of the leak is still under investigation. Corrosion is being identified as a possible cause, because investigators have determined that 125 cathodic protection packages, which apply electric current to the pipeline to reduce corrosion, were out of service. 45 of these packages were found to have been out of service for 2 years or more, resulting in the fine by the Public Utilities Commission. The utility has been required to fix these packages and has been directed by the Public Utilities Commission to conduct an internal corrosion threat assessment.
The leak was not controlled until nearly 4 months later, in February 2016. The leaking well did not have an emergency shut-off (safety) valve as it was not required for a well in this location. The lawsuit from Los Angeles County requests requiring safety valves for all wells as a possible solution.

While the leak was discovered October 23, 2015, it was believed to have been leaking for some time prior to discovery. Inadequate equipment, staff and training, as well as the public being unaware that they should report the signs of natural gas leaks have all been discussed as possible causes for the delay in discovery. As part of the settlement with Los Angeles County, the operator will install 9 infrared methane leak detection systems, install real-time pressure monitors at each storage well, hire six full-time employees to monitor the detection systems, and provide employee training related to leak detection. Efforts are also being made to increase public outreach on the need to communicate symptoms of gas leaks, primarily the rotten-egg odor associated with additives, but also health effects such as headaches, nosebleeds and nausea.

These solutions (with the exception of increased corrosion analysis and protection) aim to improve the response to the leak, rather than prevent future leaks. As the investigation continues and the causes of the leak are determined, solutions that address these causes will be considered for implementation.

To view the problem outline, Cause Map, and solutions for the ongoing investigation at Aliso Canyon, click on the thumbnail above.