Avoiding procedure horrors in your own little shop

Are you singing “Suddenly Seymour”, yet?  In this blog, we take a look at the ever-so-interesting example of a Venus Flytrap.  These fascinating creatures have captured imaginations and inspired many science fiction books, movies and even the musical  Little Shop of Horrors.  When thinking about a Venus Flytrap, the “problem” really depends on the point of view   From the point of view of the fly, the problem is getting eaten for lunch.  From the point of view of the Venus Flytrap, the problem is how to catch its lunch.  Since it’s really only a problem for one of the parties, we will  focus on the question of how, and examine the Process Map as a best practice for documenting "the how" in your shop.

The power of Processs Maps 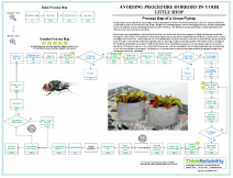 To start with, a very simple map can be created that shows the process of a Venus Flytrap eating a fly in 4 steps:  The fly lands in the trap, the trap closes, the plant eats the fly, and the trap opens again.  However, this ‘simple’ process is actually extremely complex.  In his article titled “Venus Flytraps Are Even Creepier Than We Thought” (The Atlantic, January 21 , 2016), Ed Yong outlines the process and intricacies of how the carnivorous plant works.

When the fly lands on the Flytrap’s bright red and enticing leaves, a complicated process of chemicals, electrical impulses and physics is kicked off… all with very delicate timing.  The Flytrap’s leaves are covered with sensitive hairs.  If the fly touches those hairs more than once in 20 seconds, it begins a process ensuring its own demise.  A well-timed increase in calcium ions and electrical impulses result in water flowing to the Flytrap’s leaves, causing them to change shape, trapping the fly inside.  At this point, the more the fly struggles, the more problems it creates for itself.  Further stimulating these hairs results in more calcium ions and more electrical impulses, this time resulting in the flow of hormones and digestive enzymes.

Over time, the leaves will create a hermetic seal and fill up with liquid, causing the fly to asphyxiate and die.  Next, the pH level of the fluid inside the trap drops to 2, and the digestive process begins in earnest.  Recent research suggests that chemical sensors on the Flytrap’s leaves can detect the level of digestion of the fly, stimulating the release of more digestive enzymes if needed, or causing the trap leaves to open back up.  The Flytrap is then ready to begin the process again.  As Charles Darwin said, “THIS plant, commonly called Venus’ fly-trap, from the rapidity and force of its movements, is one of the most wonderful in the world.”  (1875. Insectivorous Plants)

This Process Map, while detailed, could surely be broken down into further detail by a entomologist who deeply understands the intricate workings of a Venus Flytrap.  Fortunately for a baby Venus Flytrap, this process map is coded directly into its DNA, so it doesn’t have to rely on anything to know what to do.  Unfortunately for us, work-related tasks are rarely so instinctual.

We rely on job procedures, process maps and word of mouth to learn the best, safest way to get the job done. Ensuring consistency with that transfer of information is key to making sure that incidents and problems are avoided.  Problems that result from poorly defined procedures or work processes can go by many names: procedure not followed, human error, etc.  At the end of the day, the roots (pun intended) of many of these problems are poorly articulated or poorly communicated work processes.  The simple tool of a process map can help minimize these problems by making the steps of the process clear and easy to understand.

Problems provide an opportunity for process clarity. In other words, problem solving is an opportunity to identify the breakdowns and gaps within your work processes. By conducting a thorough incident investigation when a problem occurs, you have an opportunity to reveal lessons learned, which can then lead to the implementation of best practices across your organization.