The 5-Why method is part of Toyota’s history. Sakichi Toyoda (1867 to 1930) founded Toyoda Automatic Loom Works in 1892 to improve the process for making woven fabric. He is credited with developing the 5-Why problem solving method. Toyoda Automatic Loom Works grew into Toyota Industries and Toyota Motor Corporation. Taiichi Ohno (1912-1990) was another quality pioneer at Toyota. Taiichi is recognized as the architect of the Toyota Production System in the 1950s and what is now called lean manufacturing. He continued to drive the 5-Why method within Toyota and described it as the basis of Toyota’s scientific approach.

Many organizations use a strict interpretation of 5-Whys where the fifth Why is known as the root cause. Asking a few Why questions is a simple way to begin analyzing a problem, but there is nothing special about the number five – other than it’s after four and before six. Contrary to popular belief, the fifth Why is not “the root cause” of the issue. The fifth Why is a cause of the issue, just not the cause. 5-Why is a sound approach, but it’s simply a phase of a root cause analysis investigation, not a complete method. A cause-and-effect analysis begins with 1-Why, and then continues with as many Why questions as needed to explain the issue.

Regardless of the magnitude, a simple, linear 5-Why can be built for any issue. A bigger incident will have a more detailed analysis, because it has more parts, but every analysis can begin with just a few Why questions. A simple analysis makes it easy to get started. It can then expand into as much detail is needed to thoroughly explain the issue. Cause-and-effect relationships should remain simple, even on complex issues. It’s the number of cause-and-effect relationships that change.

5-WHY Cause Map™ Diagram

Our Cause Mapping® method is not constrained by five Why questions. In the welding robot example, the answer to the first Why question is “Because the circuit overloaded, causing a fuse to blow.” A cause-and-effect relationship has been written into the answer. The answer to the second Why question makes the same mistake. The original 5-Why breaks into an easier to read 7-Why. The 7-Why then breaks into a 17-Why with two different goals affected. The production goal because the welding robot stopped and the property goal because the bearings had to be replaced in the pump. There are two other cause-and-effect relationships shown on the welding robot Cause Map diagram. Why didn’t we know the pump lost circulation and why were there metal shavings in the pump? Both questions are important when considering different options for preventing a similar problem in the future. 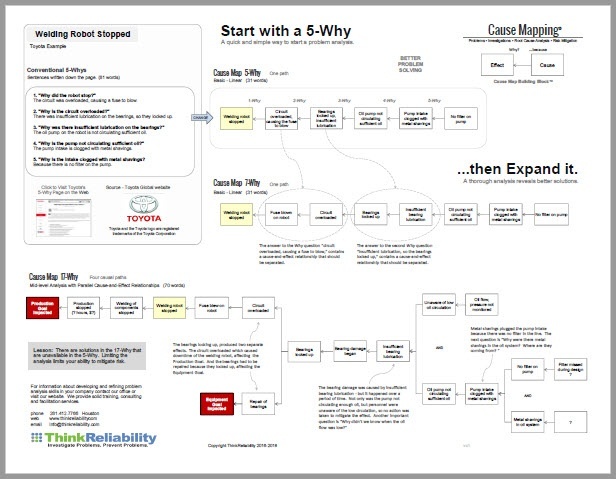 Let us know if you have any questions about establishing a 5-Why baseline with your people and bringing the Cause Mapping method to your organization.