Cause Mapping | Investigations | Cause and Effect | Case Studies & Examples

On September 16, 2016, in the wee hours of the morning, Laura Levis began having an asthma attack. The attack continued to intensify and get worse. She was alone, so she decided to walk to the hospital emergency room (ER) nearby. When she arrived at the hospital, she could not get inside. The ER doors were not clearly marked. Laura went to the first set of doors that she noticed, which happened to be the ambulance entrance, and those doors were locked. Her asthma attack continued to worsen.

She walked to a nearby bench and called 911 at 4:23 am to report that she was having an asthma attack outside of Somerville Hospital, but was unable to get inside. At this time, Laura was able to clearly state where she was and what was happening.

Shortly after her phone call, Laura collapsed and lost consciousness on the bench between the emergency room doors and the ambulance entrance. These two sets of doors are a mere 100 feet apart and Laura was only 29 feet from the unlocked ER doors. It took 10 minutes for her to be found after she placed the call, but by that time it was too late.

Laura’s husband is a writer for the Boston Globe. You can read his account of what happened here.

This is a tragic example of an incident that likely could have been prevented. Using a Cause Map to clearly capture the cause-and-effect relationships that led to the incident helps unveil several opportunities for improvement. A Cause Map is a visual tool for performing a root cause analysis that can be used to help explain why something happened.

When Laura called 911, the call was routed to the regional dispatch center. Laura clearly stated her emergency and her location. She repeatedly said she felt like she was dying. Unfortunately, the regional operator could not send direct help, and Laura had to be transferred to a local operator. The local operator asked her to start from the beginning and repeat her emergency. By this time, Laura was having trouble speaking due to her worsening attack.

The regional operator told the local operator that Laura was outside Somerville hospital having an asthma attack and that she was unable to get inside. Location information generated from her 911 call gave a generic street corner that was approximately 200 feet from her actual location. For unknown reasons, the regional operator did not tell the local operator the exact location that Laura had previously shared during the first conversation. While on the phone with both operators Laura lost consciousness.

Not realizing that Laura was 29 feet from the hospital entrance, the Somerville Police dispatcher called an ambulance to help find Laura. Next, the dispatcher called the local fire department. Like the telephone game we played as kids, the accuracy and completeness of information lessened as additional phone calls were made. The last phone call that was made was to the Somerville Hospital. The operator told the charge nurse that a girl is having an asthma attack outside the hospital and the patient reported the emergency room door was closed.

The charge nurse went to look out the ambulance-access doors. She opened the locked doors, peered left and right, but did not actually walk outside to look. The nurse’s search for the patient lasted 12 seconds. Laura was on a bench in the darkness about 70 feet away. The nurse went back inside and walked to the ER doors.

The nurse looked outside the ER doors but did not see Laura. The nurse called the local dispatcher back and stated that she looked outside the doors but did not see anything. In one last effort, the nurse called Laura’s cell phone. Laura was unable to answer, but the surveillance video shows her cell phone screen lighting up right around this time.

Two security guards were on duty the night of the incident who could have helped with the search. Neither was informed of the situation.

After looking for Laura in other areas of the hospital, the fire department’s engine eventually arrived at the ER. A firefighter was the first to find Laura. He began CPR immediately. Laura was unable to recover from the accident and she passed away several days later. 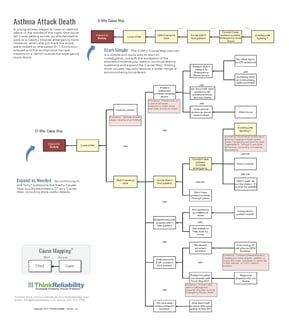 One might say this is an example of a Swiss cheese model incident. Many holes had to line up for the incident to happen. Some people call this type of incident a perfect storm. If only our 911 system’s GPS had been able to locate exactly where the cell phone was, then help could have reached Laura sooner. If only the nurse would have looked harder for a patient outside the hospital, then her life could have been saved. If only the security guards were made aware of the situation, then they might’ve found Laura sooner. If only the open emergency room doors were more brightly and clearly marked, or if there was brighter and better lighting outside, then maybe Laura would have received the care she needed to survive. If only Laura would have told someone about her asthma attack before leaving her apartment and her trip to the emergency room, then she may have made it through those ER doors.

In the end, Laura’s husband contacted a malpractice law firm to see if there was any retribution for this tragic loss of life. Although the state and federal investigations revealed many missed opportunities and potential negligence, the hospital is well protected from malpractice law suits. While the hospital never admitted any wrongdoing, after the incident they did modify and improve the outdoor lighting and signage for the ER doors which may help prevent a similar incident.

Studying past incidents and trying to learn lessons from each one can help each of us work to reduce the risk of similar incidents occurring in our own lives and organizations. Try to think of the worst possible outcome in every scenario, and then try to mitigate that outcome as much as possible. One thing we can all do is use the buddy system in any potentially dangerous situations.