On Sept. 2, 2019, the worst maritime disaster in California since 1865 occurred off the coast of Santa Cruz Island. The MV Conception dive boat caught fire and sank, killing 33 passengers and one crew member on board.

As an avid diver and someone who books similar overnight dive trips, this incident really struck home for me. Just like I’ve done after a day of diving, the passengers of the Conception plugged in their cameras and phones to charge, and went to bed on the 75-foot liveaboard dive boat to prepare for another day in the water. But on this trip, one of the crew members woke up to a fire around 3 a.m.

The boat was equipped with smoke detectors, although none sounded in the crew’s bunk area. In addition, there hadn’t been a roaming night watch, despite regulations requiring one.

The fire began in the salon, and because of the layout of the boat and a blocked escape hatch, the below-deck passengers were trapped. The crew’s sleeping quarters were on the top deck, with the passengers below deck. Once awakened by the fire, the crew couldn’t get below deck and were forced to jump overboard after placing the initial mayday call. Five crew members, including the captain, survived.

To better understand how this tragedy occurred, I used the Cause Mapping® method of root cause analysis to break out the cause-and-effect relationships within the incident. First, we begin with the impact to safety of the 34 fatalities. From there, we begin asking Why questions as we move to the right. By doing this, a 3-Why Cause Map™ diagram may look like this:

This is a significant incident with a significant amount of detail to be analyzed—there are more than three or even five causes. By continuing to ask Why questions, the Cause Map diagram expands to a 17-Why with multiple causal paths. Click on the thumbnail below to view and download the PDF. 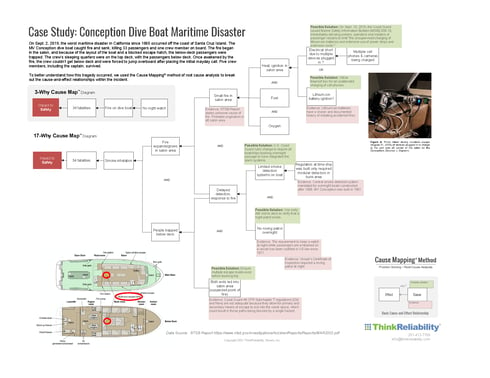 By digging into the details of the incident, we’re able to identify possible solutions for multiple causes. By choosing and implementing the most effective of these solution options, we’re able to minimize the risk of a similar incident occurring in the future.

For more information about how the Cause Mapping method can be used to analyze incidents of varying magnitude and severity to minimize risk and prevent incidents, sign up for one of our upcoming, free 45-minute webinars.