On Christmas Eve in 1913, 73 people lost their lives when a person in a crowd yelled “fire!”, causing party goers to panic. The crowd moved down a narrow stairway towards the only exit creating a bottleneck at the exit door and 73 people were crushed to death. You can use our Cause Mapping Template to conduct and document a root cause analysis case study for this incident to learn more about the lessons that can be learned from this tragedy. The Cause Mapping template will capture what, when, and where the incident happened, why the incident happened, and what will be done to prevent it from happening again.

What is a Cause Map?

The Cause Mapping® method can be used to investigate and document how an incident happened in three simple steps: define the problem, conduct an analysis, develop solutions. In addition to facilitating verbal discussions, a Cause Map improves the process of collecting information by showing how multiple causes contributed to the problem.

Over 400 local miners and their families were attending a Christmas party in the Italian Hall in Calumet, Michigan that was put on by the local union, Western Federation of Miners.

At some point during the party, someone yelled “fire!”. No proof of a fire was ever discovered. The union had gone on strike in July of 1913 in an effort to improve wages, hours, and working conditions and remained on strike during the Christmas party. Some believe that the person who yelled “fire!” was a strikebreaker. Many theories abound, but none have been proven to this day.

Most, if not all, of the people tried to escape the building through the front door, which was at the bottom of a narrow stairway. There were a double set of doors that likely opened outward, but this point has been debated as well. Although two fire escapes were reported to exist, there are no accounts of anyone exiting the building using the fire escapes. There are no answers in reports as to why the fire escapes were not utilized. Seventy-three people, mostly children, either suffocated or were trampled.

It is difficult to analyze this root cause analysis case study because it happened over 100 years ago and there is conflicting information. Additionally, many of the party attendees were asked and forced to answer questions in English, which was not their first language. But even with these challenges, there are still useful lessons that can be learned by studying this incident. Click on the thumbnail below for a downloadable PDF of this root cause analysis example. 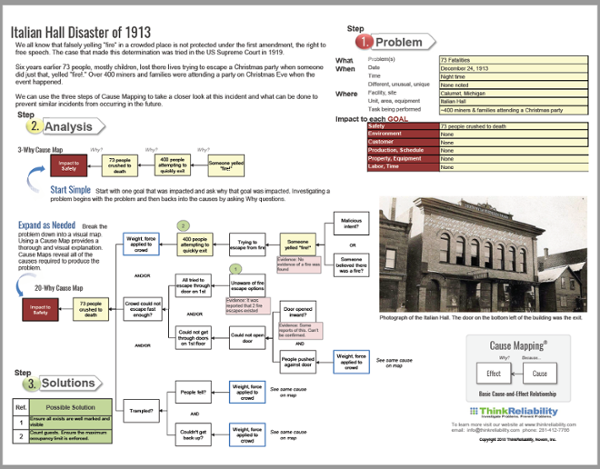 Although this accident may not have directly influenced the development of building fire codes, it highlights the importance of establishing and following codes. Combining multiple layers of protection such as maximum occupancy limits and multiple escape routes can drastically reduce the risk of loss of life. Building fire codes cannot prevent someone from falsely yelling “fire!” in a crowded indoor place, but they can make it safer, easier, and quicker to escape a crowded building. Seat belts and fire escapes are similar in that they will not prevent the accident from happening, but they significantly increase your chances of survival in the event of one.