An entire lake is drained

Can you imaging watching an entire 1,300 acre, 3.5-billion-gallon lake empty in a matter of a few hours? You might wonder if a dam was breached or if the Earth suddenly flipped on its axis, but that’s not the case in this incident. People watched in shock as Lake Peigneur disappeared before their eyes down a whirlpool in the middle of the lake just like a bathtub emptying down its drain.

How did this happen?

To understand, we'll look back on this root cause analysis example.  On November 20, 1980, an oil rig floating on Lake Peigneur was in the process of drilling a well. While drilling, the 14” drill bit seized up and the workers attempted to free the stuck drill bit. The workers heard loud pops and then the drilling platform began to tilt. Sensing that something was wrong the workers evacuated the drilling platform and sought refuge on the lake shore. Soon after the platform and derrick were swallowed by a lake that was ten feet deep on average. A bad situation continued to get worse.

The drilling company was aware of the salt mine under the lake, but what no one knew at the time was that the drill bit had pierced the salt dome and the water was draining into the large cavity of the salt dome. The water rushing in quickly dissolved the salt and what started as a 14” hole grew larger and larger. The whirlpool that developed on the lake surface was estimated to be ¼ mile wide. Then an interesting thing happened. The Delcambre Canal that usually served as an outlet of the lake became an inlet. Ocean water from the Gulf of Mexico flowed through the canal and into the draining lake and salt mine. Along with the salt water came another nearby drilling platform, a loading dock, 70 acres of soil, trucks, trees, structures, a parking lot, 11 barges from the canal, and a tug boat. It all was consumed by the whirlpool. Days later 9 of the 11 barges resurfaced.

Amazingly, no injuries were sustained as a result of this incident. Fifty people were underground in the salt mine at the time of the incident. One worker saw incoming water and called an emergency evacuation. All fifty employees evacuated the mine to safety because of well-rehearsed planning and drills. 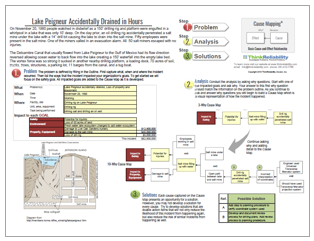 How was the drilling rig off target?

The plan, of course, was to drill into an oil producing formation, not the active salt mine where fifty people were working the day of the incident. Due to an error in the interpretation of the coordinate data (latitude and longitude) used to position the drill rig, the drill bit missed its intended target and instead punctured the salt mine below the lake and drilling platform. What was the interpretation error? The wrong projection system was used to translate the coordinates onto a map. The coordinates were given in one system (Transverse Mercator), but they were used in a different system (Universal Transverse Mercator). Although both systems use latitude and longitude coordinates, each system uses a different method to project the coordinates onto a map. If you enter the same latitude and longitude into both systems, you will get two different points on a map. Click here if you would like to learn more about the different coordinate projection systems.

How do you improve?

This incident can be better understood by doing a root cause analysis and building a Cause Map. A Cause Map is a visual diagram of the cause and effect relationships that led to the incident. Once you establish how and why and incident happens, then you can brainstorm possible solutions to reduce the risk of a similar incident from happening again. What this Cause Map reveals are opportunities to strengthen protection systems, such as the development and documentation of an engineering design review process. One individual step in that review process could be to verify the coordinate system. There may also be opportunities to improve warning systems. The miners were not notified by an outside source of the potential catastrophe. This Cause Map also highlights the successful execution of the emergency response and evacuation procedures that allowed all the miners to escape unharmed. It isn’t just luck that allowed one miner to detect a dangerous situation, act quickly, and save lives. These actions can be evaluated for their success to ensure if similar disasters occur, the emergency response plan will again be successful.