On the morning of June 5, 2006, three workers were killed after a tank exploded near Raleigh, MS.  We built a root cause analysis example using the information from the Chemical Safety Board's report of the accident to help understand what caused the explosion and to dig into the lessons that can be learned from it. 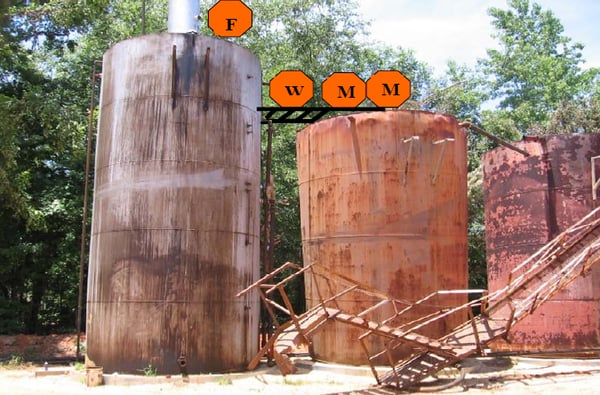 The ladder in the image above was drawn in to depict the ladder that was used by the welder to access the pipe connection on Tank #4.  The welder used fall protection to attach himself to Tank #4 and began to weld.

Hydrocarbon liquid remained in Tank #2 and it heated in the morning, expanded and vapors moved through the open overflow pipe to Tank #3. Tank #3’s overflow pipe was open to the atmosphere near where the welding was taking place.

Vapors ignited, and the fire flashed back into Tank #3 and then into Tank #2, causing both tanks to explode. All of the workers were blown off the top of the tanks. The three workers that were not using fall protection were killed. The welder sustained a broken ankle and hip.  Witnesses stated that the top of tank two landed about 250 yards away. 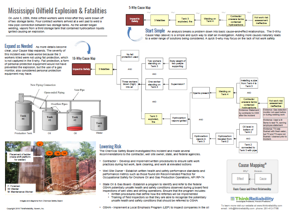 Unfortunately, this accident could have been prevented by adhering to safe hot work practices put forth by the National Fire Protection Association (NFPA) or the American Petroleum Institute (API). Some of these recommendations include:

Two of the fatalities may have been prevented if a proper and safe platform or scaffold had been used for the welder to access the piping on Tank #4, instead of using a ladder that required two men’s weight to hold it steady.

This tragic incident highlights the importance of not only having established procedures, but also training employees to follow those procedures. The Chemical Safety Board investigated this incident and made several recommendations to the contractor, well site owner, state, and federal agencies, including:

There are many lessons learned from this tragic accident and the recommendations that can be used to prevent similar accidents in the future. The full report by the Chemical Safety Board can be found here.You can also view additional Root Cause Analysis Examples on our website.