A Cause Map for a Waterfall of Wine

On September 25, 2018 L'enoteca Zanardo Giussano posted a video of a Prosecco tank in Italy overflowing. Reports estimate that 30,000 liters, approximately 7,925 gallons, of Prosecco were lost. The video went viral with over 1,000,000 views and it left us wondering how this happened. We took the information we had to start our root cause analysis case study of the incident and started our Cause Map.

There is not much information publicly available, but we can use problem solving techniques to start capturing cause-and-effect relationships on a Cause Map.  The first step in the Cause Mapping method is to define the problem by filling in an Outline with the basic background information. Then we ask ourselves “how did this incident negatively impact our company’s goals?” This incident likely impacted more than one of the winery's goals and all of the impacted goals can be captured on the Outline. Capturing all of the impacted goals helps to quantify the problems and ensures that all facets of the issue are considered during the analysis. Click on the thumbnail below to view the PDF. 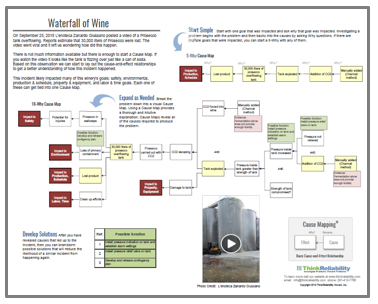 How Prosecco is made

In order to understand what is occurring in the video, you need to know a little bit about how Prosecco is made. Prosecco’s natural fermentation process does not produce enough CO2 for the desired result. A secondary fermentation occurs where CO2 is added to the Prosecco in stainless steel tanks. This process is called Charmat-Martinotti. The CO2 is forced into the liquid where it remains trapped under pressure.

If you watch the video, it looks like the tank is fizzing over just like a can of soda. Based on this observation we can start to analyze the problem by laying out the cause-and-effect relationships in a Cause Map to get a better understanding of how this incident happened.

Something may have gone awry that caused the pressure in the tank to increase so much that the tank exploded or burst. Additionally, the tank’s strength may have been compromised. Once the tank became open to the atmosphere the entrained CO2 came bubbling out, just like a can of soda when it’s opened. 30,000 liters of Prosecco were carried out of the tank with the escaping CO2.

During and after the event, while Prosecco was flowing through the facility, the scene was likely dangerous. A potential for slips, trips from moving debris, and falls was present. The winery may have had to hire a 3rd party to help clean up the mess, especially if the Prosecco left the footprint of the facility which also has the potential to impact the environment. There must be some sort of damage to the tank for it to be overflowing. Finally, the winery lost 30,000 liters of the very product that they produce and sell.

Several solutions come to mind to reduce the chance of a Prosecco tank from bursting and overflowing again. Pressure indication could be added to fermentation tanks. After that is done, then automation could be added with pressure set-points to warn if the pressure or liquid increases above a safe level. A contingency plan could be developed and rehearsed to minimize the impacts if an accident does happen in the future.

You can see that you don’t have to have all the information about an incident collected to start capturing cause-and-effect relationships in a root cause analysis. All you need to know for sure is that something happened, and it negatively impacted your organizations goals. From there you can build the Cause Map with the information that is available while making a list of information that needs to be collected.