In 2001, the Milwaukee Brewers erected a statue to three iron workers who were killed during construction of their new baseball stadium, Miller Park. Jefferey Wischer, William DeGrave and Jerome Starr lost their lives on July 14, 1999 at approximately 5:12 p.m. when a crane named “Big Blue” collapsed while lifting a section of the stadium’s retractable roof. Through an investigation of this incident and the causes related to it, we rediscover that safety is the responsibility of everybody.

For Miller Park, a special crane was required to lift the roof sections. Big Blue was a monster—a 567-foot LTL-1500 Transi-Lift heavy lift crawler crane that could lift more than 450 tons. It had a somewhat unique configuration, consisting of two separate crawlers 100 feet apart and connected by a space frame structure called a stinger.

The front tub rotated on the front crawler using a king pin as a pivot. The king pin was 12 inches in diameter, 11 feet long—a solid shaft made of 4340 steel with a yield strength of 103,000 psi.

Assembling the retractable roof atop the ballpark would take 30 planned lifts. The first nine lifts were completed without incident. The tenth lift was set to hoist 400 tons when the collapse event occurred. Midway through, Big Blue fell onto another crane with a man-basket. The second crane collapsed, resulting in the fatalities and injuries. The decedents fell 200 feet to the ground.

What sets the Big Blue collapse apart is the existence of a video which depicts this tragic collapse. The video captures the booming sound of the kingpin failing and the horrified reactions from those witnessing the event. The video was filmed by a Division of Occupational Safety and Health (OSHA) inspector. The full video of the collapse can be viewed here, or you can watch a shortened version below: The Cause Map™ diagram, a visual format for performing a root cause analysis, allows us to intuitively lay out the report information to quickly show the cause-and-effect relationships that led to this issue. The first step in the Cause Mapping® method is to fill in an outline with basic background information and a list of how the incident impacts the goals of the organization. An outline for this incident could look like this: 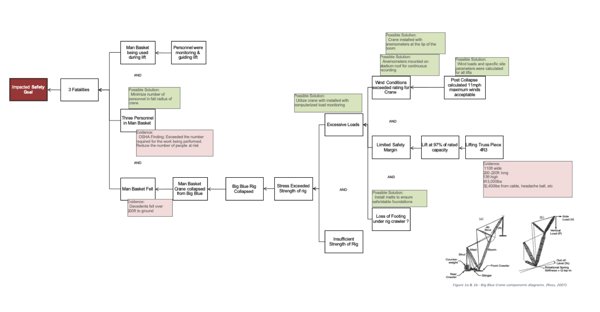 There are additional impacts that could be added to the outline, but it was kept relatively simple for this example. Once the outline is completed, the next step is to analyze the incident by building the Cause Map diagram. Start with one of the impacted goals and ask Why questions to begin. A 5-Why Cause Map diagram for this incident could look like this:

Starting with the five Why questions is a good place to start, but clearly, more detail is needed to understand this incident. The Cause Map diagram is expanded by continuing to ask Why questions.

Cause Map diagrams rarely lay out in a straight line. A branch occurs when there are multiple answers to a Why question (meaning there are two or more causes that contribute to an effect). For example, the wind conditions far exceeded what was later determined to be acceptable. (Click here to download the Cause Map PDF file.)

A System of Causes

The Cause Mapping method does not identify a single cause for an incident, but a system of causes that lead to the issue at hand. Over the past three months, I’ve done some investigation into the Big Blue collapse and the system of causes has become clearer. Additional relevant information included:

The rig was operating at 97 percent of its rated capacity. The prime contractor faced penalties for delays, which may have contributed to the motivation for firing the lift company supervisor. The responsible person/group for calculating wind loads was not clearly identified, which lead to allowing the operation to move forward despite the fact that the wind conditions exceeded the rating for the crane. All of the causes had to happen for this tragedy to occur. Because multiple causes have been identified, there are multiple potential solutions to choose from to prevent an event like this from occurring again. This Cause Map brings up some heartrending points about how safety is the responsibility of everyone.