How did a cold war nuclear bomb go missing?

A little over 60 years ago a cold war nuclear bomb was jettisoned off the coast of Georgia near Tybee Island. The US military immediately began recovery efforts, but the bomb was never found. Many theories exist revolving around this incident. Was there a cover up of the recovery or is it buried deep in muddy estuary of the Wassaw Sound? We may never know the answers to those questions, but we do know the answers to why it got there.

Around 2 A.M. on February 5, 1958, a training exercise was conducted off the coast of Georgia. This was during the most frigid period of the Cold war, and training was underway to practice attacking specific targets in Russia. During this particular training mission, Major Howard Richardson was flying a B-47 bomber carrying a Mark 15, Mod 0 Hydrogen bomb containing 400 pounds of conventional explosives and some quantity of uranium.

The realistic training mission also included F-86 ‘enemy’ fighter jets. Unfortunately, one of those jets, piloted by Lt. Clarence Stewart, did not see the bomber on his radar and accidentally maneuvered directly into the B-47. The damage to both planes was extensive. The collision destroyed the fighter jet, and severely damaged the fuel tanks, engine, and control mechanisms of the bomber. Fortunately, Stewart was able to safely eject from the fighter jet. Richardson had a very difficult quest ahead of him: to get himself and his co-pilot safely on the ground without detonating his payload in a heavily damaged aircraft. He flew to the closest airfield; however, the runway was under construction, making the landing even more precarious for the two crew members and for the local community that would have been affected had the bomb exploded upon landing. Faced with an impossible situation, Richardson returned to sea, dropped the bomb over the water, observed that no detonation took place, and returned to carefully land the damaged bomber. 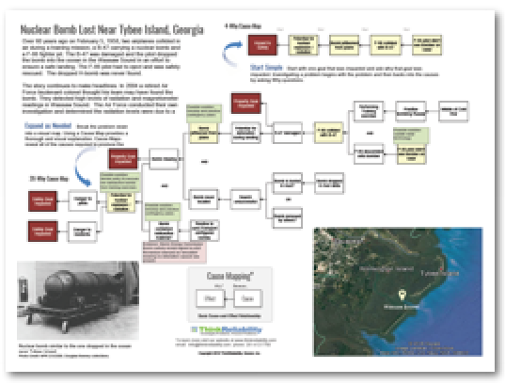 The Navy searched for the bomb for over two months, but bad weather and poor visibility did not make the search easy. On April 16, 1958, the search was ended without finding the bomb. The hypothesis was that the bomb was buried beneath 10 – 15 feet of silt and mud. Since then, other searches by interested locals and the government have still not identified the location of the bomb. In 2001, the Air Force released an assessment which suggests two interesting points. First, the bomb was never loaded with a ‘detonation capsule’, making the bomb incapable of a nuclear explosion. (Until this time, conventional wisdom suggested that the detonation capsule was included with the bomb.) Second, the report concluded that it would be more dangerous to try to move the bomb than to leave the bomb in its resting place.

Many causes contributed to the collision and the missing bomb. Although we did not have the privilege of being a part of the official military investigation, I assume there were recommendations that were developed related to improved training mission practices, improved record keeping, and improved radar. By understanding and revealing all the causes that led to an incident you can develop a wide range of solutions that will reduce the likelihood of a similar incident from happening again.  Many causes lead to many possible solutions. Many possible solutions lead to the ability to choose the most effective combination of solutions.