Challenger Disaster: Analyzing NASA’s Decision Making with a 5-Why

Cause Mapping | 5-Why | Case Studies & Examples

Last week, Netflix released a four-part documentary series about the Challenger space shuttle disaster that occurred on Jan. 28, 1986. In it, we see footage and hear interviews from the colleagues, friends and families of the seven astronauts who died when the shuttle disintegrated 73 seconds after liftoff. The loss of the shuttle and its crew was a significant, complex incident. In this blog, we’ll use it as an example of how a complicated issue, even one with organizational culture implications, can begin to be analyzed with a straight-line 5-Why Cause Map™ diagram. 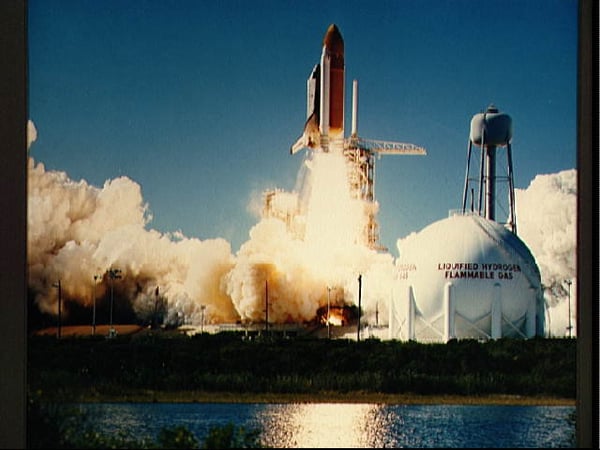 Using the Cause Mapping® method of root cause analysis we can better understand what happened on the coldest day of 1986 in Cape Canaveral, Florida. The Cause Mapping method is a visual form of root cause analysis that allows you to break an issue down into its parts to better understand what happened and determine more effective solutions.

If you ask people why the Challenger was lost, you’ll probably get different answers. You may hear it was due to the O-ring failing, poor decision-making or because it was the coldest day of the year. In investigating any incident, big or small, the process of specifying the problem is likely to elicit multiple responses. Which is right? All of them. All three are causes of the Challenger’s loss.

For this example, let’s say someone said that the crew of seven was lost because of the O-ring failure. That is a cause-and-effect relationship. In this 3-Why, we place the impact to the organizational goal (the effect) in the box on the left and the cause in the box on the right. To read it, start from the left with the Impact to Safety goal, then ask, “Why?” Because of the “Loss of 7 crew.” Why? Because the “Challenger broke apart.” Why? Because of the “O-ring failure.” By asking three Why questions, we begin to lay out what happened

From this point, we continue to ask Why questions to build our 5-Why Cause Map diagram. If you watched the documentary series or are familiar with the incident, you know there were NASA engineers and experts who did not think the Challenger should launch on that fateful day. One of those engineers may have a 5-Why that looks something like this:

Asking five Why questions identifies five cause-and-effect relationships in series. The Cause Mapping method starts with one Why question, and then builds into a 3-, 4- or 5-Why. This short, straight-line Cause Map diagram provides a starting point for the analysis. There is not one correct 5-Why. As long as the causes are accurate and evidence-based, you can have multiple 5-Whys for one incident. They’re all accurate, but they’re partial explanations of why the tragedy occurred. Other 5-Why Cause Map diagrams could look like the following--because they're all evidence-based, accurate cause-and-effect relationships:

Because the incident, in this case the Challenger disaster, happened one way, we can break the incident into its parts and see how the cause-and-effect relationships came together. The analysis of an incident this catastrophic will expand to a 15-, 30- or even 100-Why Cause Map diagram, depending on the amount of detail included.

The Cause Map diagram accommodates the amount of detail needed for complex issues because it’s not limited to one causal path. Cause and effect naturally splits into multiple causal paths when more than one cause is required to produce an effect. Because more than one cause is required, we place the causes in parallel with an “AND” between. Here, we see that the straight-line 5-Why Cause Map diagram expands into a larger, more detailed Map with multiple causal paths. 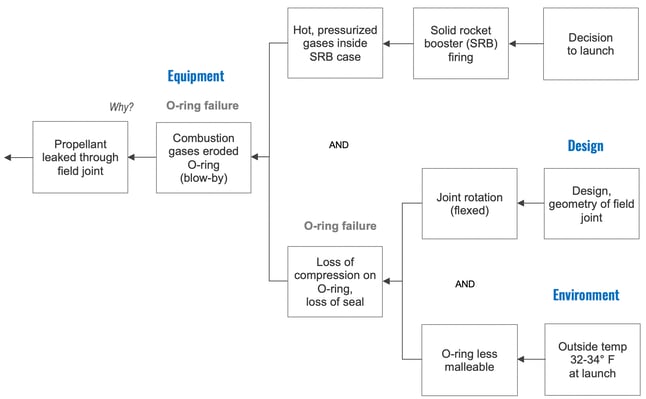 If the decision wasn't made to launch at that specific time, then the booster wouldn’t have fired when it was 34 degrees outside. If we can control that cause, the likelihood of the incident occurring is lowered. It doesn't guarantee the O-ring wouldn't have failed on a future attempt when the temperature was 50 degrees, but it does reduce the likelihood. What was different for this incident was the decision to launch was made when it was 34 degrees.

Management at NASA was unaware many employees were concerned about the O-ring sealing effectively at such a low temperature. That part of the analysis can be expanded by asking another Why question, “Why was the decision made?” There were misinterpretations of the data, misunderstandings with the severity of blow-by on previous flights and unclear risk assessments regarding the reliability of that joint.

All of these details of what some people might call organizational cultural issues can be found by asking, "Why was the decision made?"

Some of the reasons (causes) of why the O-ring failed were temperature related, some were related to the design of the SRB join and some were management decisions. This is how simple Why questions back into what some would call the physical and organizational causes of the disaster. This is the benefit of diagramming the different parts of an incident. As far as the cause-and-effect principle is concerned, they are all causes. They all contributed to the unfortunate consequence of losing the Challenger and its crew.

As investigators collect more information and learn more details about the causes leading up to the disaster, those causes should be included in the Map. Doing so naturally backs into issues often categorized broadly as organizational culture, poor decision-making and human error. The Cause Map diagram incorporates these issues because they are causes of the incident. A thorough analysis includes all of the causes, whether related to equipment, training or culture.

Grounded in the basics of cause and effect, the Cause Mapping method of root cause analysis is a simple and effective method for investigating safety, environmental, compliance, customer, production, equipment or service issues. It can be applied consistently to day-to-day as well as catastrophic issues like the Challenger disaster.

Interested in learning more? Consider joining one of our upcoming free webinars, online short courses or full Cause Mapping workshops.