Cause Map | Cause and Effect | Case Studies & Examples

Scuba diving is a popular water sport for people seeking adventure in the depths of an otherwise unreachable undersea landscape.

In the United States, there are between 2.6 and 3.5 million active scuba divers, with as many as 6 million divers worldwide, according to the Diving Equipment and Marketing Association (DEMA ). 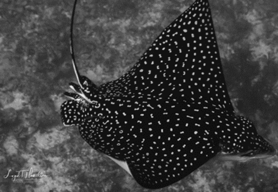 If you’re new here, welcome! But if you’ve read any of my past blogs, you may have gathered that I’m an avid scuba diver and photographer, having completed over 500 dives all over the world. Recently, as I was preparing for an upcoming trip, I stumbled across an article written by another experienced diver who had a near-fatal experience while using a complex piece of diving equipment called a rebreather.

The equipment’s computer somehow did not connect with the rebreather apparatus as it should have. As a result, the diver became asphyxiated and subsequently passed out.

If not for the quick thinking of his dive team, he would have been – in his own words – “a statistic on a crappy spreadsheet.” With the diver’s permission, we’ve created multiple Cause Map™ diagrams, ranging from simple to complex, to illustrate the incident, its causes, and potential solutions.

As we dive in, it’s important to understand a few scuba basics.

What Does Scuba Diving Entail?

Most people have heard of scuba diving or even have added it to their list of things to do someday. In general, it’s an experience in which you dive underwater to explore the immense depths of the sea.

The word itself is an acronym for Self-Contained Underwater Breathing Apparatus, which refers to the specialized equipment needed to dive. Traditional diving gear, or open circuit gear, is relatively uncomplex and consists of a gas cylinder secured to the diver’s back.

The tank connects to an air hose and a regulator that controls the flow of air to the diver while they’re underwater. It ensures the pressure in a diver’s lungs is the same as the pressure of the water. In addition to the cylinder is a buoyancy control device (BCD) that adds or releases air for buoyancy.

Most dives take about an hour before tanks are depleted. Because of this, some divers choose to use what’s called a rebreather to extend the time they can stay underwater during a single dive.

A rebreather is a more complex piece of equipment that essentially recycles the gas an open-circuit diver would exhale, conserving gas volume and extending the range of a dive. Below is a diagram comparing the two pieces of equipment divers can choose to use.

Additionally, divers who use a rebreather always carry a “bailout bottle,” or an open-circuit cylinder as an optional backup in case of equipment malfunction.

Rebreather systems have many benefits, including:

While there are many rewards to using a rebreather, there are also risks. The more complex a piece of equipment is, the higher the probability of failure. Rebreathers are no different. These devices “can cause hypoxia if oxygen is not added to the breathing loop and the diver remains unaware of decreasing oxygen levels,” the Divers Alert Network outlined.

“In addition to learning how to assemble and test the equipment, CCR divers train to properly breathe, adjust their breathing gas mixture, respond to emergency situations including hypoxia, hyperoxia and equipment malfunctions, and switch to their open circuit equipment if the unit fails.”

The diver was exploring Truk Lagoon, a popular dive location in the Central Pacific Ocean known for its more than 60 underwater shipwreck sites dating back to World War II.

Here is an abbreviated version of events as published by the diver on the ScubaBoard forum:

“The short version of the incident is that I jumped in the water and was preparing to dive. I took a breath and felt dizzy. I stopped and took another breath and thought to myself ‘I should get back on the boat!’

The next thing I remember is waking up on the dive deck with people pounding on me and trying to jam a regulator in my mouth. I was able to get up and get inside to the AC, they put me on oxygen and brought me to ER where I spent a few hours sucking down oxygen, taking in an IV, and being poked, prodded and tested.

Once I was safe to be released, I went to a hotel by the airport and rested until it was time to go home.”

These 4-Why and 6-Why Cause Map diagrams are good starting points to break down the problem. Read by asking “Why” after each effect and “Because” for each connector arrow, the diagram provides a baseline perspective.

In the longer version of events, the diver outlines some nearly fatal mistakes: First, his rebreather unit had been serviced prior to the trip, but he hadn’t had the opportunity to test it.

Secondly, when the diver put his unit back together on the trip, the computer didn’t connect, so he wiped the connectors and reconnected. Starting a dive with a known issue is not only dangerous, but it’s among the first things taught not to do in dive classes, and he admits he knew better.

Finally, he got in a hurry to dive. “The final error was that I did not verify my solenoid was firing. In my rush to get in the water, I breathed the PO2 in my loop down to a level that would not support life.”

Two breaths of gas and the diver passed out. Fortunately, his dive buddy was able to rescue and resuscitate him, and he was quickly treated by emergency services.

While the diver was quick to accept his part in the event, there are a number of other causes that took place at once for the incident to occur. The diver passed out after breathing the oxygen out of the loop and while he admits to insufficient testing of the rebreather, it’s important to note that the rebreather system was not delivering oxygen. This was caused by a malfunction, but it could have been avoided had the diver manually added oxygen.

This is represented as follows: 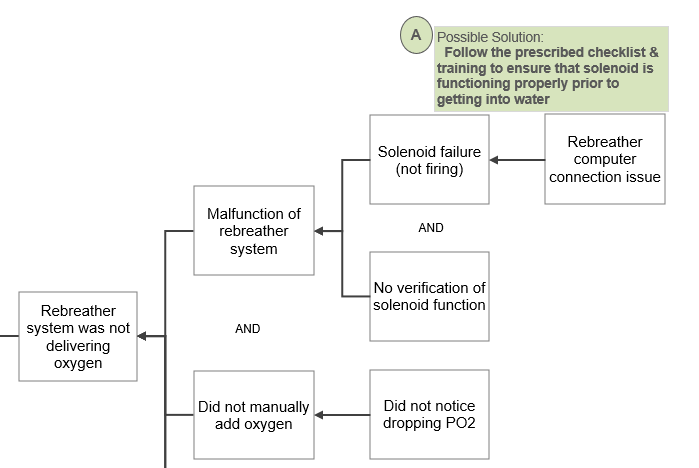 With the causal relationship, the word “AND” between both causes shows that both are required for the incident to occur. Controlling one cause can reduce the risk. Recognizing multiple causal paths and exploring each one provides a greater number of actionable solutions.

For example, possible solutions could include:

Though the diver was experienced and trained, when the unexpected happened and he took a breath of the hypoxic mixture, "All the training, all the skills practice, all the thoughts that 'It will never happen to me' meant nothing. My brain simply did not tell me to do anything." This diver faced both equipment issues and a feeling of being rushed to start the dive, which combined for a near-fatal event.

Implementing one, or, ideally, several solutions reduces risk and – even if one of the causes takes place – helps keep the diver from catastrophic consequences. The goal of creating a Cause Map diagram is to reveal as many causes as needed to find solutions that will meet your goals. 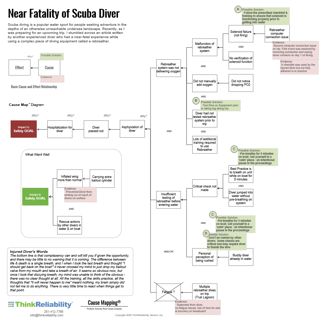 For this incident, we’ve created a 20-Why Cause Map diagram that further examines causes, potential solutions, and what went well for the diver. Download the full Cause Map diagram, or Download our free Cause Mapping template in Microsoft Excel to dive into your own problems and start mapping solutions.