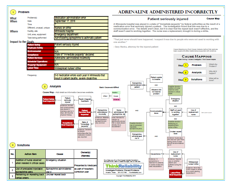 A Minnesota hospital was placed in a state of “immediate jeopardy” by federal authorities as the result of a medication error that seriously injured a patient, requiring a plan of corrective action to be created by the hospital. In order to create a correction action plan, a comprehensive incident investigation is required. A Cause Map diagrams cause-and-effect relationships visually to achieve an investigation. Corrective actions (or solutions) can then be developed to address the system of causes that resulted in the incident.

The first step of this process is to define the problem, including the what, when and where of the incident. In this case, the problem was a medication administration error that occurred September 17, 2016. Along with the date and time, the “when” also addresses any important differences (or things that were unique or unusual at the time of the incident). At the time of the incident, nurses in the area were on strike. Capturing this piece of information does not mean that the difference is necessarily causally related, but is something that should be examined during the investigation. The incident occurred at a Minnesota hospital emergence department while administering epinephrine to an asthmatic patient.

The second step of the Cause Mapping process is the analysis, or Cause Map. One of the impacted goals is used as the first “effect” and “Why” questions determine the cause-and-effect relationships. The patient safety goal was impacted because of the serious injury to a patient, due to a rapid and irregular heartbeat caused by epinephrine being administered incorrectly. (Other impacted goals are tied in where applicable.) Epinephrine was administered to the asthmatic patient, who was having difficulty breathing, after albuterol did not resolve the problem, as instructed by the emergency room doctor. However, the epinephrine was administered intravenously (via IV), rather than by direct injection into a muscle (IM).

The investigation found that this was due to a communication error, which are more common in emergency situations. The details aren’t clear (the doctor and pharmacist say the order was for the dose to be administered IM, but the nurses said the doctor said “yes” when he asked if the dose should be given intravenously), but it is clear that the repeat back wasn’t effective, and the staff wasn’t used to working together. The nurse was a replacement, brought in during the strike.

There is disagreement about the role the strike played in the incident. It is possible that nurse inexperience contributed to the issue – IV epinephrine is used for patients in cardiac arrest who need resuscitation. The Star Tribune conducted a review of preliminary state death certificates and found 115 patient deaths during August, vs. 135 during a one-month period over the strike. A 2010 paper by the National Bureau of Economic Research found a 19.4% increase in in-hospital mortality during hospital strikes in New York from 1984 to 2004. However, other indicators of patient care and increased inspections by the Minnesota Department of Health didn’t show a worsening during the strike. And, mistakes with the administration of epinephrine are common. Minnesota reports five to six medication errors each year that result in patient death or disability.

Once the cause-and-effect relationships for an incident are captured, solutions can be determined. The goal of these solutions is to reduce the risk of the goals being impacted. The solutions that were presented to Medicare as part of the corrective action plan included adding a nurse observer when needed in critical cases, providing staff retraining on repeating back verbal orders, and using preloaded injectable epinephrine pens that can’t be administered via IV. The nurses’ strike ended October 11th, but the patient impacted by the error is still in physical therapy.

To view the investigation (problem outline, Cause Map, and corrective actions), please click on the thumbnail above.