The Eradication of Guinea Worm Disease

Working to eradicate a painful parasite

This amazing accomplishment was performed without a vaccine or medication to treat Guinea worm disease. The success of the eradication effort has been possible by sharing knowledge about how the disease is spread and the use of a few relatively low-tech solutions. This root cause analysis example shows how thoroughly understanding a problem can aid in the development of effective solutions.

What is Guinea worm disease?

Guinea worm disease is a parasitic infection that is contracted when people consume water contaminated with Guinea worm larvae. The female worm matures inside the host and grows to about a meter in length. The Guinea worm then creates painful blisters on the skin and slowly emerges from the body.

This process is as horrible as it sounds. The traditional method of treating Guinea worm is to wind the worm around a small stick and slowly removing it manually, which can take weeks. Guinea worm disease is extremely painful, and people suffering from it are unable to work and support themselves and their families for long periods of time, so impacts of the disease go far beyond the misery caused directly by the parasite.

Lifecycle of the Guinea worm

In order to understand how the number of infections dropped by 99.99%, you need to understand the (rather disgusting) lifecycle of Guinea worm. Guinea worm larvae live in fresh, stagnant water. Copepods, small crustaceans, eat the Guinea worm larvae. Humans then drink the water, consuming the infected copepod. The infected copepod is dissolved in the human’s stomach, releasing the Guinea worm larvae. The Guinea worm larvae drills out of the intestines, enters the abdominal cavity where it remains until it reaches sexual maturity. Guinea worms then mate, the male dies and the female migrates to the skin’s surface. She then pierces the skin (generally on a lower extremity) and releases an irritant that creates a painful blister. The host may then put the blister into water to relieve the painful burning sensation. The Guinea worm senses the water and releases embryos into the water, starting the process all over again. It’s worth noting that the female does not release all of the embryos at once and will continue to release more whenever she senses water so one host can potentially contaminate more than one body of water.

Click on the thumbnail to view a Process Map of the lifecycle of the Guinea worm. 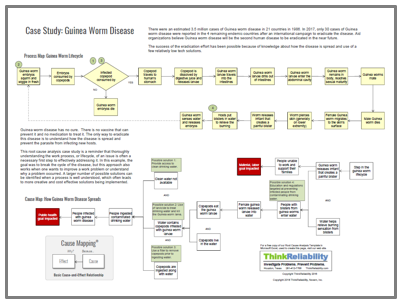 Guinea worm disease has no cure. There is no vaccine that can prevent it and no medication to treat it. The only way to eradicate this disease is to understand how the disease is spread and prevent the parasite from infecting new hosts.

The tools that have been used in the fight to eradicate this disease have been relatively low tech. Educational outreach teaching about how Guinea worm is spread has been done to help communities understand why it is important that infected individuals stay out of bodies of water that are used as drinking sources.

Some communities have stationed guards at water holes and/or instituted new laws that prohibited people with Guinea worms from entering bodies of water to help prevent transmission of Guinea worm disease. Efforts have also focused on providing access to other sources of clean water or providing means to filter drinking water, such as use of relatively inexpensive filtered straws, so that copepods that are potentially infected with Guinea worm larvae are removed prior to individual’s ingesting the water.

In some regions, larvicide has been used to treat drinking water and kill any Guinea worm larvae. These fairly simple solutions have prevented millions of humans from ingesting Guinea worm larvae and have been impressively effective at reducing the number of cases of Guinea worm disease worldwide.

Guinea worm disease is on target to be be the first parasitic disease ever eradicated and the first disease to be eradicated without the use of a vaccine or medication. No new technologies have been invented and no new weapon, like the small pox vaccine, has been created to fight the Guinea worm disease and yet the efforts to eradicate this disease have been remarkably effective.

How does this help you?

Eradicating a disease that 3.5 million people suffered from in a single year is an ambitious goal. You may face similarly daunting problems in your organization. This root cause analysis case study is a reminder that thoroughly understanding the work process, or lifecycle, of an issue is often a necessary first step to effectively addressing it.

In this example, the goal was to break the cycle of the disease, but this approach also works when one wants to improve a work problem or understand why a problem occurred. A larger number of possible solutions can be identified when a process is well understood, which often leads to more creative and cost effective solutions being implemented.