Last Monday, Feb. 17, Ryan Newman was in a horrific crash at the Daytona 500. Two days later, he walked out of the hospital holding his daughters’ hands. How is that possible after a crash like that? Specific solutions were put in place after learning from previous accidents.

Nineteen years ago, to the week, on Feb. 18, 2001, Dale Earnhardt was killed when he crashed into the outside wall of the same track. A basic cause-and-effect analysis of that fatal accident shows the fatality was caused by violent trauma to the head and neck because the car slid into the wall after being bumped on the track.

The cause-and-effect relationships break into a little more detail in the next Cause Map™ diagram. The violent trauma to the head and neck happened because the body stopped relative to the car, but the head continued moving forward. This is the whiplash that occurs in car accidents every day. When driving, your body is moving at the same speed as the car. When a collision causes an abrupt stop, the body stops too because the driver is restrained with a seatbelt, but the person's head is not restrained. The car stops, and the head continues to move forward, causing significant stress on the neck, which can result in a fatality. If we dig into the details of the cause-and-effect relationships, more solution options become available.

One of the solutions after Dale Earnhardt’s accident was to make the wall softer. It’s called a SAFER (steel and foam energy reduction) barrier. It's still a solid wall, but now it acts like a big spring—reducing the acceleration and G-forces on the car, which ultimately, reduces the stresses on the driver.

That reduction in acceleration helps, but your head can still move forward. Another solution option is to put a seatbelt on the driver's head, called a HANS (head and neck support) device. It tethers the helmet to a collar on the driver’s shoulders that is then secured with a seat belt. As a result, head movement is restrained. The HANS device was available at the time of Earnhardt’s accident, but it wasn’t required, and he didn't like it because it was too restrictive. After his death, the HANS device became a requirement and the SAFER barriers were installed along the outside and inside track walls. Multiple solutions were introduced to produce a cumulative reduction in risk of a similar fatal accident occurring. Having one solution reduces the risk of a fatality but implementing both the HANS device and the SAFER barriers reduces the risk even further.

Fast forward 19 years, and Ryan Newman is in a crash. The cause-and-effect analysis, below, is similar to that of Dale Earnhardt’s except it lists “serious injuries” instead of “fatality.” Newman was in the hospital for two days.

Ryan Newman’s crash had two different significant collisions. The first contact was when he hit the wall, but you can see on the Map below, the wall is now the SAFER barrier. Of course, there was still significant force, but it was relatively lower. The car was also designed with crumple zones that were different from the 2001 design Earnhardt drove, making the forces on the driver lower by absorbing additional energy. Much of the remaining forces were transferred into the seat and the HANS device, which further reduced the forces on Newman’s body.

Once Newman’s car hit the wall, it rebounded back into the track. At this point, the car was upside down, traveling toward the finish line where the second contact occurred. Newman’s car was hit on the driver's side door by another car (No. 32) at 200 miles per hour. 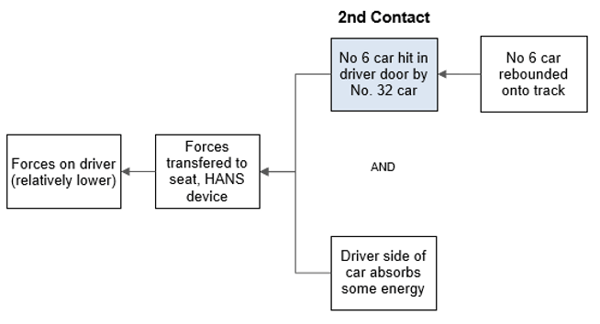 Newman’s head and body are protected by the seat harness, the HANS device and the heavily reinforced side of the car. Additionally, the driver sits a little farther away from the side door bars while netting helps keep their arms inside the car. These different layers of protection result in relatively lower forces on the driver.

It was still a significant crash that looked much more violent than Dale Earnhardt’s accident. Ryan Newman was transported to the hospital with serious injuries. This photo shows him walking out with his daughters two days later. The changes that were made as a result of Dale Earnhardt’s death are causally related to Ryan Newman surviving last week. (Photo from Roush Fenway Racing). 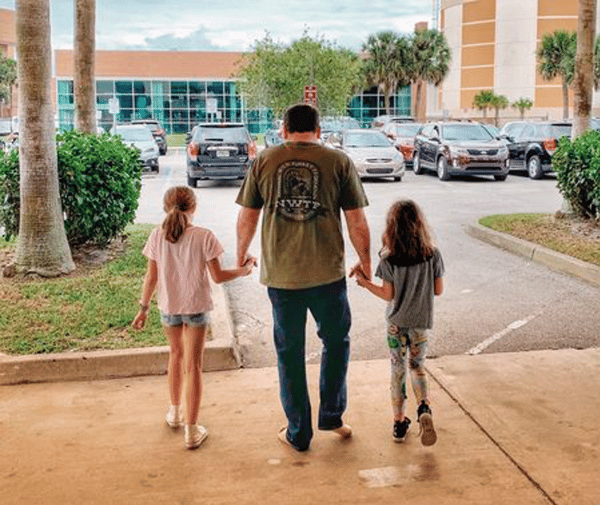 This is the same progression of solution implementation and risk reduction that organizations strive for in their operations. If a problem occurs, first, you must thoroughly analyze it by breaking it down into parts, then you can identify specific actions to reduce the risk of similar incidents. You may not race cars, but this same systematic approach applies to your organization. NASCAR and the racing industry are an example of how lessons learned turn into best practices.

To learn more about applying cause-and-effect thinking to reduce risk and prevent incidents within your organization attend one of free webinars or sign-up for our upcoming Cause Mapping® public workshops.