How to Investigate a Near-Miss

Investigations | Root Cause Analysis | 5-Why

What is a near-miss?

A near-miss had the potential to be a problem, but it did not happen. At least, the problem wasn’t as bad as it could have been. A near miss is also referred to as a close call. Some people think it should be called a near-hit since nearly missing would actually result in a hit. Either term works fine. The point is that the negative consequences were not as bad as they could have been.

A near-miss is a signal to your organization. The ability to turn a potential catastrophe into a near-miss may indicate resiliency within your operations. Quickly and appropriately responding to a bad situation is important. But some near-misses are just blind luck. There was no coordinated response. We dodged a bullet. We’re just fortunate the problem wasn’t worse. Either way, near-misses contain valuable information that can help an organization mitigate risk if they know how to fit all the pieces together.

Investigating what DID happen and DID NOT happen

In a near-miss, some negative consequence did not occur, but some did. All of it can be captured in the incident investigation on the Cause Map – what did happen and what could have happened. Just like actual problems, near-misses also have a magnitude or severity. So, the analysis of a near-miss sprained ankle will have less detail than a near-miss fatality. Some organizations refer to more significant near-miss injuries as High Potential. These naturally will get more attention because of the risk.

Almost hit by a falling crate

Consider a near-miss where a person was almost hit by a falling crate. The sling that was used to lift the crate broke. A person walking through the area just happened to be clear of the spot where the crate hit the floor. No one was injured, but the equipment inside the crate was damaged. This is a near-miss safety issue. We’re fortunate it wasn’t a serious injury or even a fatality. A 5-Why Cause Map looks like this:

Notice the Safety Goal is affected because of the potential for an injury.  The words “Potential for” are highlighted in blue in three of the cause (effect) boxes to show they did not happen. These hypothetical cause-and-effect relationships can be shown on a Cause Map. Notice the cause to the 4th Why did occur. The person was walking through area but didn’t happen to be in the exact location where the crate fell. The person was lucky. The cause did occur, but the effect did not.

Download the Near-Miss Cause Map for the Crate Fell Example: 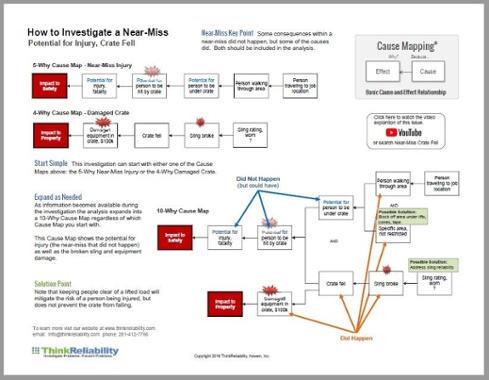 Two causes for being hit

Look how this root cause analysis expands. For the person to be hit by a falling crate there are two causes. The person would need to be directly under the crate AND the crate had to fall. This is shown as a parallel cause-and-effect relationship on the Cause Map. The 5-Why becomes a 6-Why with a second causal path.

For a person to be hit by a falling crate both causes must occur. If either one is changed, the effect – person hit by crate - doesn’t happen. In this specific case, the person was walking through the area, but did not happen to be under the crate when it fell, so there’s no injury. Whew. This is the cause-and-effect of this near-miss.

DID and DID NOT happen

The analysis can be expanded even further. The crate falling to the floor produced two separate effects. Two different company goals were affected on this one incident. The Safety Goal was affected because of the near-miss injury and the Property Goal was affected because of the actual damage to the equipment. Both are causally related to the crate falling. 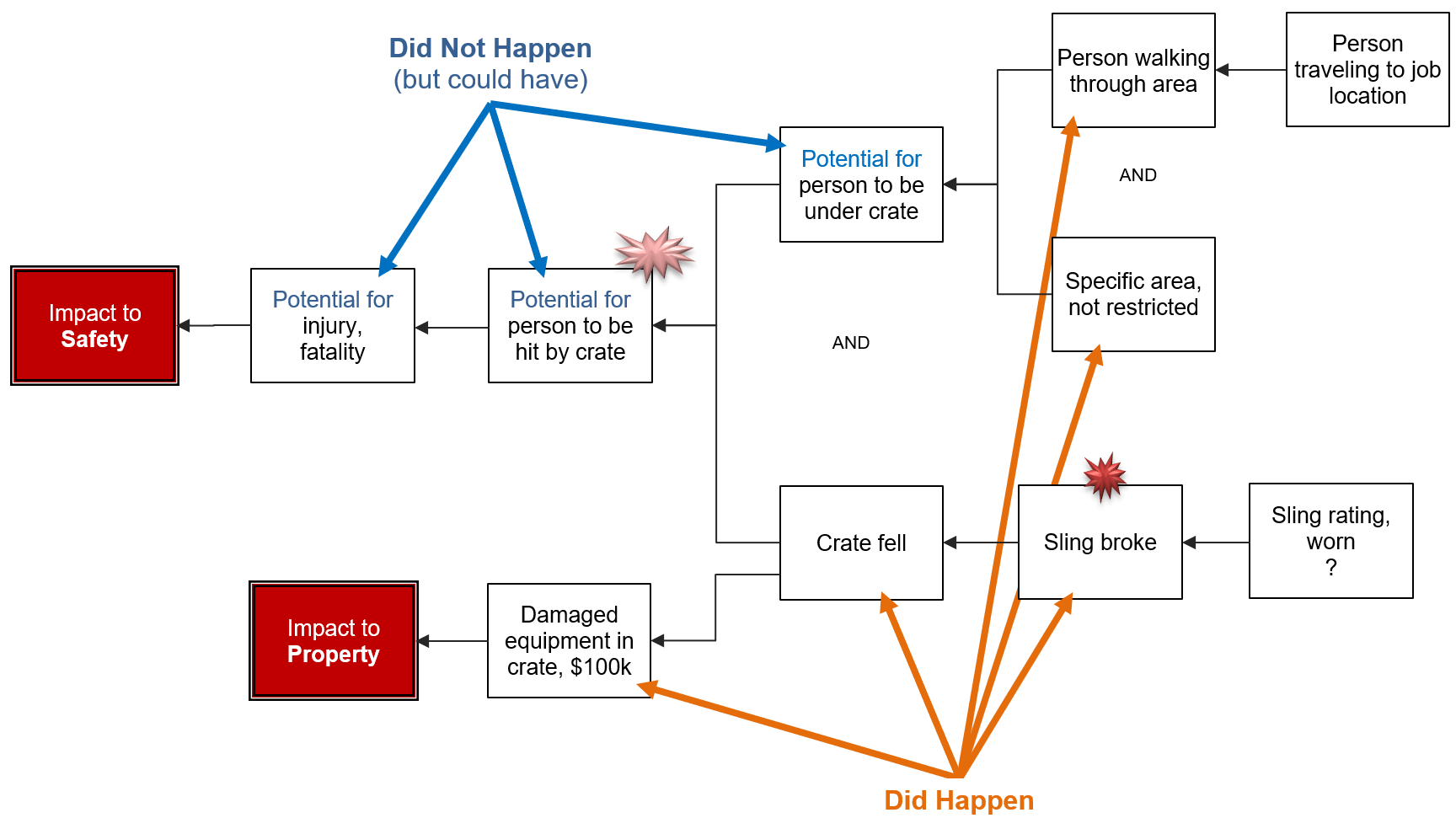 At this point in the investigation we don’t know why the sling broke. People may speculate that the sling wasn’t rated for that weight or maybe the sling was worn, but those are unknowns. They’re labeled on the Cause Map with a question mark until the facts become available. That evidence needs to be collected.

In this video, we walk through the Cause Map builds in investigating the near miss of the crate falling.

A solution that restricts the area beneath the lifted crate, like putting up cones or tape, would reduce the risk of a person being hit, but it does nothing to prevent the crate from falling. Why the crate fell is a different causal path with different solutions. To mitigate risk effectively, it’s important to understand which causes affect which goals within an incident. The visual layout of a Cause Map makes those connections easier to see.

The key here is to keep your investigations simple at the beginning then add detail as it becomes available. The Cause Map will expand into as much detail as you need to thoroughly explain the issue so that effective solutions can be found. Download our Cause Mapping Template and experiment with this approach. If you want some help with your problem contact our office by phone or email.