*This is the first in a series of 3 blogs. 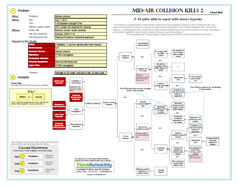 On July 7, 2015, an F-16 operated by the United States Air Force and a privately-operated Cessna 150M collided in mid-air near Moncks Corner, South Carolina. The NTSB conducted an investigation of this collision, which killed both occupants of the Cessna. The F-16 pilot was able to eject and land using a parachute, suffering only minor injuries. The analysis and conclusions of the NTSB will be presented in a Cause Map, a visual format that develops all the cause-and-effect relationships leading to an incident.

The second step of a Cause Mapping analysis begins with an impacted goal and asking “Why” questions to develop the cause-and-effect relationships. Although a linear analysis consisting of just “Why” questions can make up a basic analysis, a more thorough investigation includes all causes that result in an effect. In this case, the fatalities result from the mid-air collision, which is caused by the two planes being in the same airspace. The two planes were in the same airspace because the Cessna was in the airspace AND the F-16 was in the airspace. Because both of these causes were required for the effect, they are both linked to the effect and joined with “AND”.

The Cessna was in the airspace because it had just taken off from a nearby airport and it was unaware the F-16 was in the area. The plane had no contact with ATC as it was not required to do so. The plane was not equipped with traffic display or alerts, meaning the only way it would be aware of other air traffic was by visually acquisition. The investigation found that the F-16 was at times in a position where it would be behind the cabin roof of the plane, and thus not visible to the pilots. The investigation also found that the “see-and-avoid” concept (which “relies on a pilot to look through cockpit windows, identify other aircraft, decide if any aircraft are collision threats, and, if necessary, take the appropriate action to avert a collision”) has inherent limitations that limit its usefulness for collision protection.

The F-16 was in the airspace as it was making a practice landing at a nearby airport. It was directed into the Cessna’s airspace due to inadequate guidance from the air traffic controller. The guidance given by the aircraft controller had the F-16 enter the Cessna’s path under mistaken assumptions that the Cessna would remain in the local traffic pattern and that the F-16 would execute a “high-performance” turn. Instead, the F-16 executed a standard turn after a delay while attempting to visually acquire the Cessna. The “approach controller’s failure to provide an appropriate resolution to the conflict between the F-16 and the Cessna” was determined by the NTSB to be the “probable cause” of the accident.

As for the Cessna, visual acquisition was the only way the F-16 pilot could be aware of the Cessna’s specific location, as it was not picked up on the tactical radar system (which is not designed to register slow-moving, small aircraft like the Cessna) and it did not have an in-cockpit traffic display or alert. The F-16 was unable to visually acquire the Cessna due to the same issues the Cessna had trying to visually acquire it – obstructed view due to the plane structure and limitations with the “see-and-avoid” concept. The “inherent limitations of the see-and-avoid concept, resulting in both pilots’ inability to take evasive action in time to avert the collision” was considered by the NTSB to be “contributing to the accident.”

To view the incident conclusions in Cause Mapping form, please click on the thumbnail above.