Whenever I ask a group of workshop attendees "What is your organization's typical response/corrective action to an incident that involves someone making a mistake (AKA human error)?", the most common answer I get is, "Retrain." That seems to be the almost Pavlovian organizational response to that type of cause.

This might mean retraining the individual or perhaps even retraining of the whole department (that, by the way, does not make the person who made the mistake particularly popular). But while a large number of organizations seem to respond in this way, it doesn't really make the improvements in the organization's performance as it is clearly intended to do. And, here's why--not all human error causes have anything to do with training or insufficient knowledge of the task or job that was being performed.

Take for example, a universal human error that everyone has probably made at some point in their career or time on the job: Sending an email that was supposed to include an attachment, but forgetting to attach the file. Has anyone made that particular error? Anyone made it more than once? Anyone do it in the last seven days? If you said yes, welcome to the club!  Most of us have done it and have done a number of times.

Now, if we investigated the incident, we might call that human error or operator error, and following the same pattern as above, the solution would be identified as "retrain." Following the Cause Mapping® approach, it could visually be represented like this:

So I, or you, would be retrained on how to attach something to an email. Does that make sense? Do you think that is going to reduce the possibility that I (or you) make that error in the future? Pretty sure it's not, because the reason I didn't attach the file is not because I didn't know how to do it, it's because I forgot. This is a perfect illustration of why "retrain" as a default solution should be resisted. Instead of defaulting to this, we have to ask more questions to understand the specific causes of the human error.

In this example, the cause of not attaching the file, i.e. the human error, is that I forgot, NOT a lack of knowledge on how to do it (therefore I have crossed that possible cause out). 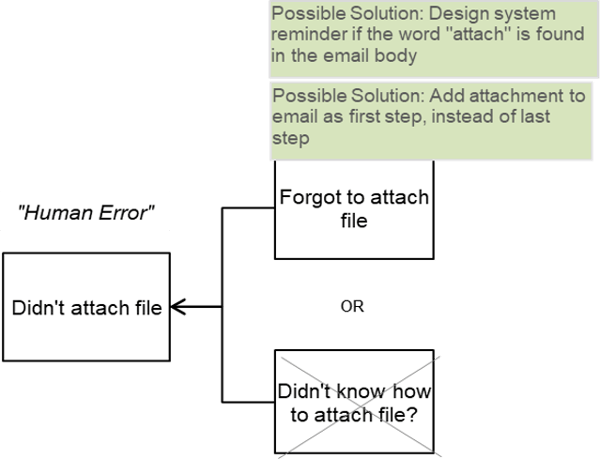 So in this case, and hopefully the Cause Map™ diagram illustrates this, a solution that includes retraining would not make very much sense in this case and would not reduce the potential of the error happening again. The only location where a training solution would be effective in mitigating the risk in the future is when the individual lacks sufficient knowledge to perform the task.

Resist the temptation to default to the retrain solution. In this example, we would want to look for solutions that make it harder to forget the attachment or to catch the mistake. These might include reminders (Outlook now conveniently asks you "Did you mean to attach a file?", checklists or change the order of the steps (attach first, not last), etc. These are the types of solutions that prevent a similar incident from recurring in the future when a mental lapse is involved.