Root Cause Logic - A Common Error

Root Cause Analysis | Cause and Effect

The Straw That Broke the Camel's Back

You’ve probably heard the saying the straw that broke the camel’s back. It refers to the one straw, the root cause, added to an already overloaded camel. That tiny straw pushed the weight beyond what the camel could carry and its back gave way. And you’ve most likely heard someone say, that’s the last straw. That last straw represents the final item in a series of events that exceeded some limit – like someone’s patience, a project schedule or the camel’s back. That one straw is an example of how a seemingly minor input can produce a disproportionately large output.

Camel's Broken Back as Cause and Effect

As a cause-and-effect relationship, the broken back is the effect located on the left. The response to the question, “Why is the camel’s back broken?” is “Because of that one straw.”  This is a simple 1-Why Cause Map™ diagram shown below. It’s accurate, but not complete.

By identifying a single cause-and-effect relationship, people frequently conclude that the effect has only one cause. This will appear to many people that the one additional straw is the root cause of the camel’s broken back, but watch the short video explanation below that visually lays out the causes.

When organizations fall into the trap of one root cause, they’ll apply a single cause approach to other problems. The focus of their problem solving becomes finding the special causes, like that one straw. These are typically labeled root causes. That one piece of straw is essential for the incident to occur, but it’s not the only thing that’s essential. In many organizations, the term root cause places special emphasis on that one critical thing, that if removed, would have prevented the incident from occurring.

Flaw in the Logic

Here’s the argument people use for the straw being the root cause: if that one straw was never placed on the camel’s back, then its back never would have broken. That statement is true, but not because of anything special about the one straw. The statement is true because an incident requires all the causes, not just the one people identify as the root cause. An incident requires all its causes.  If something was causally related to an incident, it was necessary for that incident to occur.

When a person references one of the causes of the incident, they can mistakenly conclude they have identified the root cause.  It appears they’re “right.”  This is an example of confirmation bias. People are biased to their point of view, so they select evidence that makes their point.  This simple mistake is overlooked in many organizations. And it’s at the core of unnecessary disagreements, pointless debates and meaningless arguments about who’s right when people work through a problem.

Look at this 6-Why Cause Map diagram below with three different causal paths: 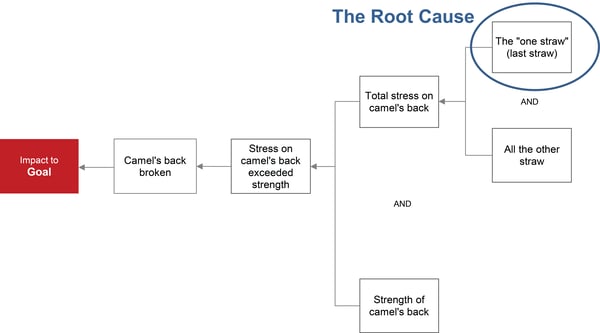 Answer this question:  Which one caused the camel’s back to break?

ANSWER:  A, B and C.  All three.  Each of the causes above had to happen for the camel’s back to break.

To prevent the camel’s back from breaking, three different solutions options are shown below.  Notice that only one solution needs to be implemented to reduce the risk of the camel’s back breaking. Organizations usually think an incident with six causes needs six solutions. That’s not true.  Only one of the causes, any one, must be controlled to change the outcome of the incident.  And, note how each solution corresponds to a specific cause from the 6-Why Cause Map diagram: 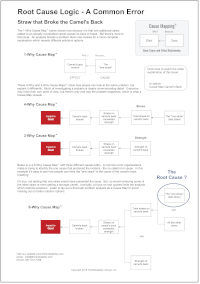 By breaking an issue down into parts, different solution options are revealed.  A 1-Why will have some solutions, but a 6-Why is going to have more solution options. Limiting the analysis of your problem will also limit your solution set. A complete analysis provides both a clearer explanation of the issue as well as additional solution options.

Conventional root cause analysis focuses on identifying that one special straw - the root cause.  Restricting the explanation of a problem, restricts the problem-solving capability of the organization. Re-think the way your organization explains, communicates and solves problems. Start with a simple analysis, then expand it as needed to thoroughly explain the issue. It’s the best way to find better solutions.