The Case of Willie King: A Cause Map of a Wrong-Site Foot Amputation

On Feb. 20, 1995, Willie King, a 51-year-old suffering from diabetes-related circulatory disease, was scheduled to have his right foot amputated. During the operation, the surgeon realized he was in the process of removing the wrong foot, but it was too late to stop. This infamous case of wrong-site surgery made national headlines and inspired long-term changes to medical operating procedures.

Investigating and Learning from Past Incidents

Although this incident occurred more than 20 years ago, performing a root cause analysis of historical incidents and working to thoroughly understand their causes can aid in developing work processes that reduce the risk of a similar incident happening again.

For this root cause analysis case study, we used a Cause Map, a visual format for performing a root cause analysis, to intuitively lay out the cause-and-effect relationships that contributed to the wrong foot being removed. We begin Cause Maps with one of the impacted goals and ask “why” questions to add additional causes. For this example, we’ll start at the patient services goal. Adding two causes could look like this:

When there is more than one cause that contributed to an effect, they are both added vertically with an “and” between them. So why did the surgeon believe he was removing the correct foot? There is more than one answer that should be included on the Cause Map. All of the causes should be added vertically and additional “why” questions could be asked along each horizontal branch of the Cause Map. Click on the thumbnail below to see the full Cause Map of the incident. 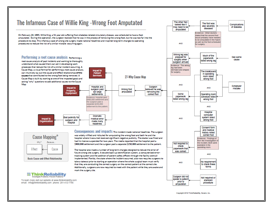 How Did the Mix-Up Occur?

The surgeon who removed the wrong foot believed he was removing the correct foot. Apparently, King was suffering from diabetic complications, which resulted in both feet being severely diseased. The foot that was not scheduled for amputation did not look healthy, so the surgeon wasn’t surprised by the condition and appearance of it. In fact, when the surgeon arrived in the operating room, he saw a diseased foot prepped for surgery, as expected. It was just the wrong one.

The wrong foot was prepped for surgery because some of the paperwork listed the wrong foot. The blackboard in the operating room, the operating room schedule and the hospital computer system all listed incorrectly. However, the consent form and medical history noted the correct foot. That paperwork, the consent form and medical history, was available in the operating room, but there was no requirement for the surgeon to check it prior to surgery. Additionally, the surgeon didn’t speak to the patient before the surgery, so they weren’t able to communicate directly and (hopefully) catch the error.

This incident made national headlines. The surgeon was widely vilified and ridiculed for amputating the wrong foot, and he and the hospital received significant negative publicity. The doctor was fined and had his license suspended for two years. According to media reports, the hospital paid a $900,000 settlement, and the surgeon paid a separate $250,000 settlement to the patient.

The hospital made a number of long-term changes designed to reduce the error of future wrong-site surgery, including implementing:

The state in which the incident occurred, Florida, now requires surgeons to meet with the entire surgical team and verify they’re preparing to perform the correct surgery on the correct patient at the correct site. Plus, surgeons are now required to meet with the patient while they’re awake and mark the surgery site at that time. Despite this case, wrong-site surgeries continue to occur every year, but they are more and more rare, thanks to measures like the ones required by the state of Florida.