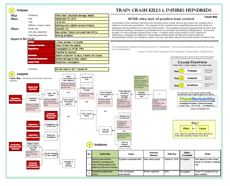 Commuters in the Hoboken terminal were shocked when a train overran the tracks and crashed into a platform of morning commuters. The impacts of this accident were magnified because this station is designed with the platform is at the end of the tracks. The accident severely damaged both the train and the terminal building, resulting in one fatality when a commuter was killed by falling debris. There were at least 114 more injuries caused by the crash. A similar crash at the station in 2011 injured 30. Authorities, including the National Transportation Safety Board (NTSB) and Federal Railroad Administration (FRA), are calling for action from the operating railroad to prevent similar incidents from recurring.

In order to implement effective action items, the system of causes that led to the incident must be understood. We can learn more about this incident by creating a Cause Map, which diagrams the relevant cause-and-effect relationships. The process begins with a problem outline, which captures the what, when and where of an incident. In this case, the issue being addressed is the train crash, which resulted in structural damage and one fatality. The incident occurred on September 29, 2016 at about 8:45 a.m. in Hoboken with NJ Transit commuter train #1614 in the act of arriving at the station. Important differences at the time and location of the incident should also be captured. In this case, the incident occurred during morning rush hour and the design of the station is such that the platform is at the end of the tracks.

Additionally, the impacts to the organization’s goals are captured within the problem outline. The safety goal is impacted because of the fatality and injuries. The customer service goal is impacted by the train crash into the station. The investigation by the NTSB and FRA, and the potential for lawsuits impacts the regulatory goal. The station was closed completely for 9 days, and 9 of the tracks are still closed, which impacts the schedule goal. The damage to the train and station are an impact to the property goal, and the response and investigation impact the labor/ time goal. These impacted goals become the first cause-and-effect relationships in the second part of the investigation, the analysis.

The analysis is captured within the Cause Map as a series of cause-and-effect relationships that led to the impacted goals. To build the Cause Map, begin with one impacted goal. In this case, the safety goal is impacted because of the fatality and injuries. Why questions are then asked to add more causes to the Cause Map. The fatality and injuries were caused by having many commuters on the train and platform due to morning rush hour, and because the train crashed into the station. Both of these causes are required for the incident to have occurred as it did. If the train did not crash into the platform, or if there were fewer commuters on the train or platform, the number of injuries would have been significantly reduced.

The train crash resulted because the platform is at the end of the tracks, and the train overran the tracks. The train overran the tracks because it was traveling above the speed limit and it was not stopped. While the investigation into the details of what happened to the train is still ongoing, the information released so far from the data recorders indicates that the train was traveling at 8 mph about 30 seconds before the crash as it entered the station, which has a speed limit of 10 mph. The train was then accelerated to 21 mph and the engineer activated the emergency brake less than a second before the crash. It appears that the action of speeding up would have had to be done manually; however, the engineer has testified that he does not remember the crash.

Although more data is desired related to the train’s acceleration, it may not be available. This does not mean that selecting effective action items, the third step of the investigation, is impossible. The train operator has issued a rule requiring a second crew member to be present in the cab while entering stations that have a platform at the end of the tracks (which is also true in Atlantic City). The hope is that a second crew member will reduce the possibility of errors by the engineer at these critical times. The NTSB and other authorities continue the call for positive train control, which, according to the NTSB, “would have intervened to stop the train and prevent the collision.” Currently there is a December 31, 2018 deadline for installation of positive train control. While NJ Transit has begun installing positive train control, they stated they will have to cease operations if the deadline is not extended. PATH, whose train was involved in the 2011 crash at the station, has said positive train control has been installed on 86% of its locomotives.

To view the outline, Cause Map, and action items associated with this incident, click on the thumbnail at the top of this blog.