Most of us have typed something incorrectly, spelled something wrong, hit the wrong key or “fat fingered” an entry. It’s happened to all of us, and for most of us, it’s no big deal. Maybe you sent out a text that doesn’t quite make sense (autocorrect did not help), or you had something misspelled in an email. Maybe you sent that email to the wrong person. (Maybe it’s a little embarrassing depending on the email content.) But in most cases, the consequences are probably not too significant.

Unfortunately, that’s not always the case. There are incorrect data entries or typos that have had significant impacts. For example, if you do an internet search for “stock market typos” you’ll find a number of these. In May 2001, a keystroke error made by a Lehman Brothers employee resulted in approximately $6 million in trading losses for the company, according to the Wall Street Journal. In December 2005, CBS News reported that an incorrect data entry by an employee of Mizuho Financial Group upset the Tokyo Stock Exchange (the Nikkei 225 Index dropped 1.95 percent), and Mizuho lost approximately 27 billion yen (~$225 million). These are not small texting errors.

Here’s a 5-Why Cause Map™ diagram of the Mizuho typo incident:

You’ll notice it ends with the common “human error” conclusion. Oftentimes, we are tempted to chalk events like these up to human error, and the typical, organizational response to human error is “re-train” or “coaching/discipline.” The individuals involved in the above incidents may have been fired as a result of their mistakes costing such large amounts of money for the companies (I don’t know that, but that is not an uncommon response). But firing the specific individuals involved does not reduce the risk of incident recurrence for the organization. The organization will still have individuals performing the same tasks, with the same tools, in the same environments, with the same training and with the same potential for error unless some change is made in training, tools, environment, etc. The often-missed opportunity for the organization is to understand why it happened in further detail, so they can determine the best way to mitigate the risk in the future.

The Cause Map diagram can help us dig deeper into human error. An unintentional human error is caused by either a mental lapse, a physical slip (“fat fingered the wrong key”), or insufficient knowledge about the task. Which cause helps us determine the type of solution that will be effective in mitigating the risk? The above 5-Why example doesn’t have enough detail to determine the type of solution that would be effective. For example, you should consider a training solution if there is insufficient knowledge. A training solution would not make sense if the employee just accidentally hit the wrong button, though. If it was a physical slip, you might look at the environment in which the task is done, the order the information is entered, etc. If it was a mental lapse, you might consider a solution like using a step-by-step checklist to confirm a step isn’t missed.

We can add those three possible causes of human error to the Cause Map example. (The question marks denote the cause of the “human error” hasn’t been confirmed with evidence yet, but even at this stage we can begin to see some potential solutions in green boxes.) 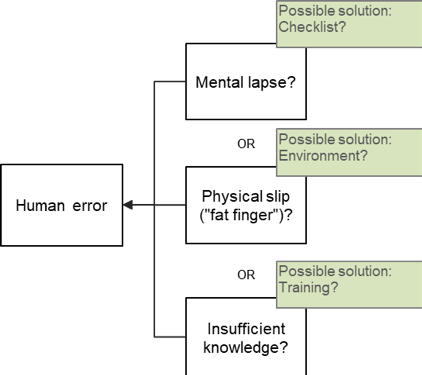 In addition to digging deeper into the human error cause, an error that results in such a large loss to the organization is also an opportunity to look at how that same error can be “trapped” in the future. In this case, if a similar error is made in the future, trapping it would include determining a plan to identify, contain or mitigate the risk, so it wouldn’t cause such a large impact to the organization’s goals if it happened again.

The 2005 Mizuho $225 million loss was caused by the actual sale of 610,000 shares of J-com stock at 1 yen per share. The sale was a result of the order being entered for 610,00 shares at 1 yen per share AND the stock exchange processing that order. If the stock exchange hadn’t processed the order, Mizuho wouldn’t have suffered the loss. The stock exchange processed the order because the system would not allow it to be canceled (Mizuho attempted to cancel the order 3 times), and the system did not identify the number of shares was invalid despite the 610,000 shares of J-com stock were actually 41 times higher than the outstanding amount of J-com stock.

Highly reliable organizations provide the tools to help their employees succeed AND make it possible for their employees to “fail safely.” This example illustrates that by using the Cause Mapping® method to understand the specific causes of the incident, we reveal opportunities for multiple solutions in the task (entering the sell order) and in the system (recovery from the erroneous entry).