Vitamin D and Your Immune System: Are You Deficient?

Vitamin D is essential to the activation of an effective immune response to viruses and disease, such as COVID-19. In my last blog, I used the Cause Mapping® method of root cause analysis to show how vitamin D could reduce the risk and severity of infection. Of course, I’m not proposing vitamin D as a miracle drug for the novel coronavirus, however, those who are vitamin D deficient may be compromising their own body’s ability to fight and control the response without even knowing it. So, how do you know if you’re vitamin D deficient? Unfortunately, whether or not you’re deficient is not quite so straightforward.

When vitamin D was first discovered in 1922, it was actually misnamed. Vitamin D is a hormone that the human body can synthesize from cholesterol in our skin with the help of the sun. All other vitamins are essential nutrients that our body can only obtain from food. The most commonly cited benefit of vitamin D is its role in the absorption of calcium, which supports bone health. However, another critical role, which I highlighted in my previous blog post, is its role in activating cellular functions, including those cells responsible for immune response.

Understanding how vitamin D works is critical to understanding how a deficiency occurs. When UVB rays from the sun penetrate your skin, your body produces an inactive form of vitamin D from the cholesterol in your skin, called cholecalciferol. Cholecalciferol is stored in the body’s fat cells until it’s needed. When called upon, the liver and the kidney will convert that inactive vitamin D via a process called hydroxylation into the active hormone vitamin D3 (1,25-dihydroxyvitamin D3). This active form of vitamin D3, also known as calcitriol, is what your body uses for cellular function.

We don’t all absorb and process the same amount of this crucial vitamin. As a result, most of us don’t know if we get insufficient amounts of it. When I had my vitamin D levels measured last summer, it was discovered that I had insufficient levels of vitamin D and was even borderline deficient. So what affects absorption and processing of vitamin D3?

When we begin using the Cause Mapping method of root cause analysis, we begin to see the causal relationships that can impact your ability to produce vitamin D from the sun. You’ll notice insufficient UVB penetration within the skin and your ability to convert UVB into vitamin D3 both play a role.

Your location, time of year and time of day exposed to UVB rays can greatly affect the process of synthesizing vitamin D within the your skin. For example, in the winter, as you move north of 35 degrees latitude (think close to the southern border of Tennessee) fewer UVB rays are able to pass through the ozone layer due to the angle of the sun. This factor, along with more time spent indoors, reduces your ability to create vitamin D. The Cause Map™ diagram below shows how a combination of the these causes increases your risk of being insufficient in vitamin D. In addition, other factors within your body also can affect your ability to convert the UVB rays into vitamin D. For example, as you age, your body’s ability to create vitamin D can decrease by 50 percent or more.

Thankfully, in spite of the challenges synthesizing vitamin D within our body, we can easily supplement. However, knowing if you’re deficient or have insufficient levels of vitamin D isn’t as easy as it seems. The first challenge is that people rarely know what their vitamin D level is. Vitamin D screening is not part of standard blood panels. I had to specifically request to have my level checked last summer. Even after my request, my doctor questioned it. The second challenge is in regard to what actually qualifies as a deficiency. There are differing schools of thought within the medical community.

According to the U.S. National Institutes of Health, a vitamin D level of less than 20 ng/mL is considered deficient. However, this standard is primarily based on the levels required to maintain bone health. Much of the research on the role of vitamin D within your immune system has been recent and likely hasn’t been considered.

The Endocrine Society published a competing set of guidelines in response to those issued by the Institute of Medicine (IOM), now known as the Health and Medicine Division of the National Academies in 2011. While the Endocrine Society agreed the recommended 20ng/ml was necessary to prevent bone health issues like rickets and osteomalacia, ES suggested the recommended levels should be even greater to reduce the risk of other diseases like common cancers, autoimmune disorders, type 2 diabetes, cardiovascular diseases and infectious diseases. In fact, ES considered anything less than 30 ng/mL to be insufficient. Using these recommendations with data ranging from 2001 to 2010, 28.9 percent of Americans had levels less than 20ng/mL, and 41.4 percent were under 30ng/mL. 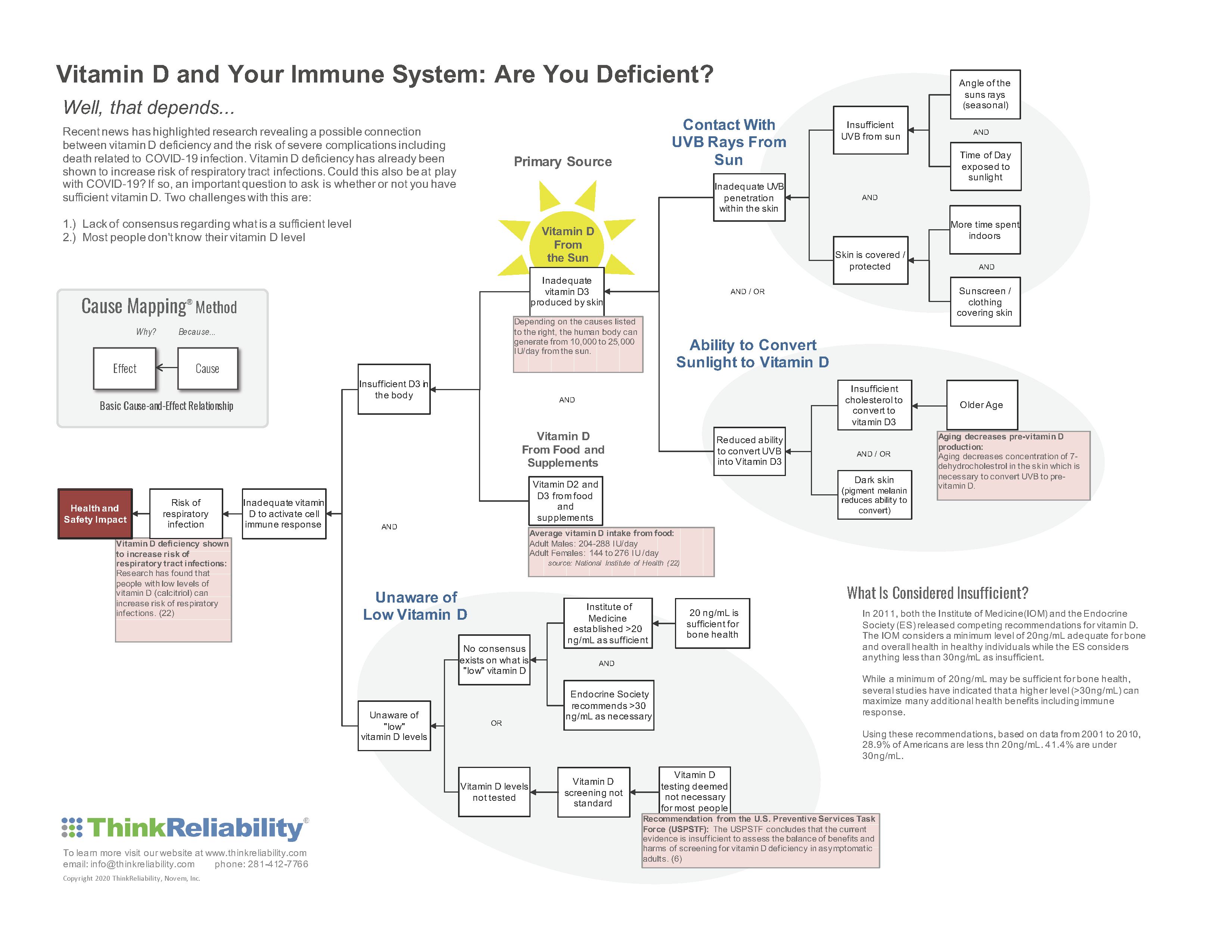 These are just a few of the interesting findings regarding the connection between insufficient vitamin D levels and respiratory tract infections. Be sure to look at the detailed Cause Map diagram to see how the system of causes related to vitamin D insufficiency can contribute to your risk of infection. If you are interested in analyzing other complex incidents with the Cause Mapping method, be sure to register for one of our upcoming Cause Mapping Root Cause Analysis Online Public Workshops and learn how to apply the method to your own problems.