When the Excrement Hit the Rotating Equipment: A Root Cause Analysis of the Common Phrase

Have you ever wondered where the phrase “the you-know-what hit the fan” came from? I never really gave it much thought until I heard a story being told recently. I couldn't help but wonder if it was the origin of the phrase.

As soon as indoor toilets were introduced to Seattle and installed, an unintended consequence was also introduced. Twice a day the direction of the flow of sewage was reversed and it came spewing out of the toilets into people's bathrooms. Most people associate the topic phrase, “when the you-know-what hit the fan,” with something bad happening. I think the following incident fits that description.

Thomas Crapper was born in England, became a plumber, and eventually founded Thomas Crapper & Co. Although the flushing toilet was already invented, Mr. Crapper improved water closets (aka bathrooms) and the toilet to include a floating ball cock, the U-bend trap, and other various plumbing fittings, making the whole experience more sanitary.

Most people in the Seattle area were still using outhouses in the 1800s until Mr. Crapper came along with his improved toilet, which Americans simply called “the crapper.” People could install an indoor toilet that used gravity to flush waste through wooden piping out to Elliott Bay in the Puget Sound. Problem solved, right? Wrong! This solution worked perfectly except for two times a day when the incoming high tide reversed the direction of the flow in the sewage pipes.

The force of the tidal waves was so great that sewage would blast out of some people’s toilets. The phenomenon was described by residents as a “sewage geyser.” So, if there was a fan nearby, then I think it is safe to say, “the you-know-what hit the fan.” People avoided going to the bathroom at high tide.

A new business was developed to collect and remove the sewage from people’s homes by horse-drawn wagons. The sewage was then loaded onto a barge and dumped in the sea several miles away from the coast. This is how indoor plumbing existed for a while in Seattle.

A fire raged through Seattle in 1889 destroying much of the city. Although the fire itself was unfortunate and tragic, it gave the city a rare opportunity to update and redesign its infrastructure.

The original city was built directly on the mud flats of the Puget Sound. This created problems when high tide brought the sewage into the streets. After the fire, property owners built walls around the first story of their businesses and backfilled the streets, effectively raising the street level one story.

This also provided a process improvement opportunity to install waterworks infrastructure that wasn’t there before and establish a publicly-owned water system. This new infrastructure led to the outfall at West Point which later became the site of Seattle’s first wastewater treatment plant. By eliminating the open outlet design the tides no longer impacted the waste water system.

Whether or not the above story is the origin of the phrase, you can see how we can take our Cause Mapping® approach to root cause analysis and apply it to any incident or problem. Start simple, expand as needed, and develop solutions. Eliminating "sewage geysers" from normal vocabulary is a great impact on society, if you ask me. 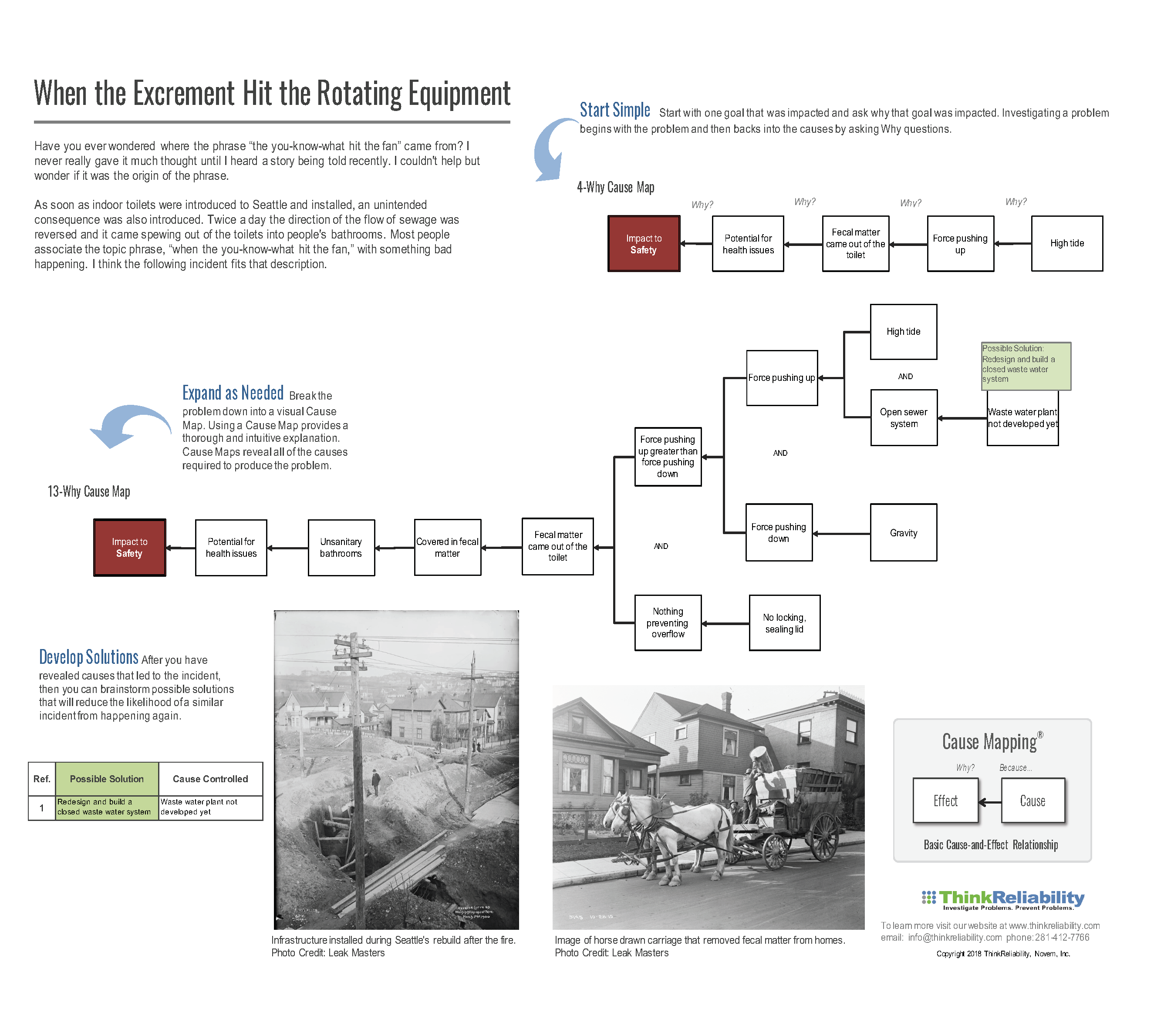