When lessons are not learned, problems repeat

During this week’s webinar, we’re going to look into industrial case studies with similar causes. One of the hardest parts of any incident is when the causes are similar to a previous incident. It leads you to think, “We’ve already had this incident, why weren’t we able to prevent it?” We keep making the same mistakes, creating the same issues, and they happen time and again and lessons are not learned. In this blog, we’re going to take a look at two industrial incidents that have similar causes. These are tragedies that happened 100 years apart. If the lessons had been learned from the earlier incident, one might argue that more recent events could have been prevented.

For this case study, I’m going to give you causes of two different incidents and ask you to identify which one happened first.

Incident #1: This factory fire resulted in ~117 fatalities and over 200 injuries. There was no sprinkler system and it was difficult for firefighters to reach the factory. Workers were unable to evacuate the factory quickly because there was no exterior fire escape, exits were partially blocked, and employees were told to ignore a fire alarm.

Incident #2: ~146 workers were killed in this factory fire. There was a delay in extinguishing the fire because a fire hose had been disconnected, fire department ladders could not reach the fire, and there were no sprinklers in the shop. Workers were unable to evacuate when the elevators failed, a fire escape collapsed, and there was no audible fire alarm.

Hard to tell? I agree. Here’s the problem definition for each which includes when they occurred. 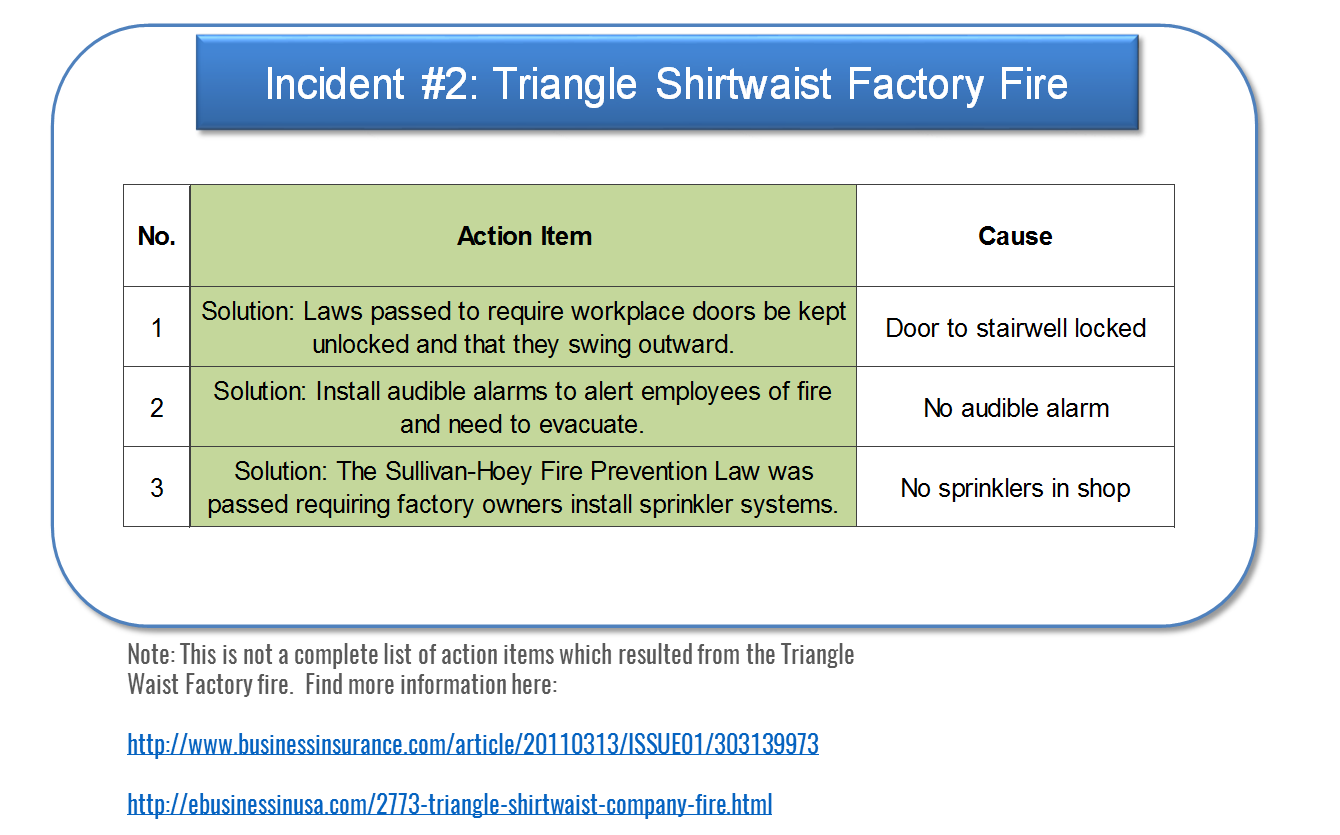 Both incidents lacked sprinklers and access to exits was restricted. These are just a few of the examples of solutions that could have reduced the fatalities at the Tazreen Fashion Factory Fire.

Unfortunately, there are other examples of incidents that occurred after similar events with similar causes and lessons are not learned. In this week’s webinar, we are going to take a closer look at some of these events. Specifically, we’ll dig into the 1942 Cocoanut Grove Nightclub Fire and the 2003 fire in The Station Nightclub. We’ll also look at some incidents that could have been worse. In these cases, we’ll look at how solutions were implemented and helped avoid tragedy.  Register here.