Why Did Kevin Get Left Home Alone?

As a fun family tradition, my daughters and I spend most of December watching all of our favorite holiday movies. I was recently watching the 1990 holiday classic, Home Alone (yes, 1990 is now considered a classic). If you remember, an adorable Macaulay Culkin plays Kevin McAllister, a precocious 8-year-old who gets left home alone when his family is heading to Paris for the holidays.

Initially, Kevin revels in the freedom of having the house to himself; being able to watch whatever he wants, eat whatever he wants, raid his brother’s room and be the man of the house (insert scream when he slaps on some aftershave). But then, Kevin has to deal with some pesky burglars and the rest of the movie focuses on the creative ways he thwarts them.

Let’s go back to “8-year-old Kevin gets left home alone.” It is a comedy of errors that allows Kevin to be forgotten as the family gets ready to head to Paris. You might also say it was the “perfect storm” or more specifically, a system of causes, that sets up the whole scenario. So, as does often happen for me, my brain starts forming this comedy of errors into a Cause Map.

We're going to put the Cause Mapping® method to use and dig into this issue.

Step 1: What is the problem?

The problem should be defined based on the impact to the goals. In this case, the impact to the family’s goals would be the potential for injury to befall the 8-year-old child. You may also capture the potential long-term trauma to the child – his family forgot him! The use of the word, “potential” indicates that there were no injuries, but the risk was there – it was a near miss. A completed outline for this issue might look like this.

Step 2. Why did the problem occur?

Step 2, the analysis, is where we start digging into the “comedy of errors,” or causes, that allowed this impact to goals to occur. A clean way to start the analysis is start with the impact to the goals, in this case the potential injury to the child, and then start asking “why?” Here is a simple, linear analysis of this incident.

Step 3. What can we do to reduce the potential for this problem in the future?

The clear benefit of understanding the causes for an incident is to be able to identify mitigations to reduce the potential for this incident to happen again. In this case, I think those learnings were missed. In 1992, Kevin was left “Home Alone” again (actually, he was left wandering the streets of New York City by himself). However, if the parents (also clearly traumatized by this event) had performed a thorough analysis, they may have been able to identify the need for a battery back-up for their alarm clock or secondary wake-up system. Yes, that’s right, in Home Alone 2 – they overslept again!

Click on the thumbnail below to download a detailed analysis of this incident, along with possible solutions that were identified based on the causes revealed. 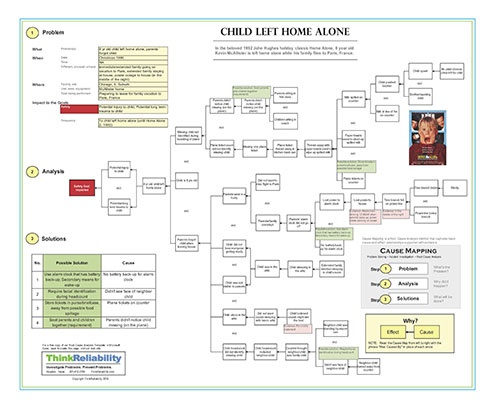 I hope you have enjoyed this light-hearted example of using the Cause Mapping® method for digging into a problem. Download a copy of the Cause Mapping template to try investigating an incident yourself! Happy Holidays!