In a well-known medical error case study, an invasive cardiac test that involved starting and stopping the patient’s heart several times was performed on the wrong patient at the University of California, San Francisco Medical Center in 2002. A 67-year-old patient identified as Joan Morris (a pseudonym to protect her privacy) was in her room recovering from a procedure to treat a brain aneurysm the previous day. When, unexpectedly, she was wheeled into a catheterization lab where she underwent a cardiac test despite her concerns about undergoing the test and that it wasn’t documented in her chart. Little did she know, a patient with a similar name, we’ll call her by the pseudonym Jane Morrison, had been scheduled for the cardiac procedure. The mistake wasn’t discovered until an hour into the procedure. Luckily, Morris was unharmed and fully recovered from the unnecessary cardiac procedure.

It is usually difficult to get detailed information about healthcare errors due to patient privacy concerns, but an article in the Annals of Internal Medicine titled “The Wrong Patient” used pseudonyms to protect the patients’ identities and discussed the timeline of events, the causes that led to the mix-up and shared some of the lessons learned in detail.

Information from the investigation can be used to build a Cause Map™ diagram that visually lays out the system of causes that contributed to this issue. Creating the Cause Map diagram can make it easier to see the cause-and-effect relationships that contributed to the incident and make the incident easier to understand. (Click on the thumbnail below to download the PDF.) 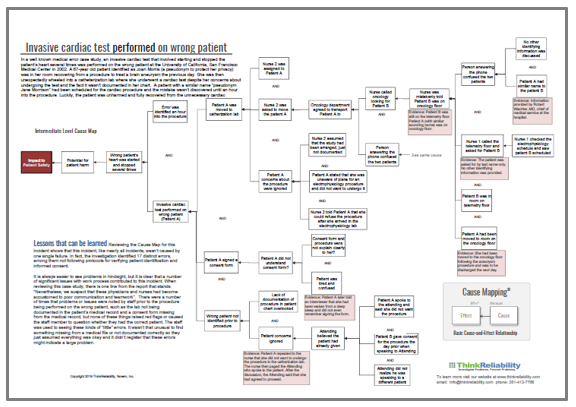 Reviewing the Cause Map diagram for this incident shows that this incident, like nearly all incidents, wasn’t caused by one single failure. In fact, the investigation identified 17 distinct errors, including: not following protocols for verifying patient identification and not receiving informed consent. There were several missed opportunities where the patient identity could have been verified. For example, when a nurse first called to locate the patient scheduled for the test, she asked for the patient by last name only with no other identifying information provided. It is easy to see how a single word could be misheard or confused with a similar name. There were several times similar communication took place where using a second piece of data to identify a patient may have prevented the mix-up.

The patient also expressed concerns about being moved to the catheterization lab and told the nurse she wasn’t aware that a test was scheduled and did not want to undergo the procedure. The nurse informed her she could refuse the procedure after she arrived in the lab and moved the patient, even though the need for the procedure wasn’t documented in the patient’s chart. During the investigation, the nurse said she assumed the test had been arranged but not documented in the patient’s chart. The patient again expressed concerns prior to the procedure, but the attending physician did not take action because he believed the patient had previously given consent. The doctor briefly spoke to Morrison, the patient who was scheduled for the procedure, the night before the procedure and she gave consent for it. However, the attending physician did not realize he was speaking to a different patient the next day.

One of the more perplexing pieces of information that came to light during the investigation was that the patient signed a consent form in the lab despite her concerns. She later told interviewers she had been woken from a deep sleep and did not remember signing the form, which raises questions about how to ensure patients provide informed consent for medical procedures.

It is always easier to see problems in hindsight, but it is clear that a number of significant issues with work process contributed to this incident. When reviewing this case study, there is one line from the report that stands out,

“Nevertheless, we suspect that these physicians and nurses had become accustomed to poor communication and teamwork.”

There were a number of times that problems or issues were noted by staff preparing the wrong patient for the procedure, such as the cardiac test not being documented in the patient’s medical record and a consent form missing from the medical record, but none of these issues raised red flags or caused the staff member to question whether they had the correct patient. The staff was accustomed to seeing these kinds of small errors. It wasn’t unusual to find something missing from a medical file or not documented correctly, so they assumed everything was OK. It didn’t register that these errors might have indicated a larger problem.

Regardless of the industry you work in, this normalization of deviance can lead to big issues. Whether it’s the alarm that triggers so many times that workers start to ignore it, or paperwork that isn’t done correctly so often employees assume it is unimportant, these types of small deviations need to be identified and addressed to reduce the risk of a large incident occurring.