To the shock of the medical team, a patient opened her eyes on the operating table while being prepped for organ removal surgery. The patient’s family was told (erroneously) she suffered cardiac death (DCD), and her loved ones had made the hard decision to donate her organs.

The patient was brought to a hospital center in Syracuse, New York after suffering a drug overdose in October 2009. She was in a deep coma for several days when her family agreed to donate her organs. The patient, after being sedated, was prepped for donation after cardiac death (DCD), despite her scans not meeting the criteria for brain or cardiac death. Thankfully, the procedures were stopped prior to an incision.

The investigation was made by the state Department of Health and the Centers for Medicare & Medicaid Services (CMS). Specifically, the CMS report stated that, “the hospital’s Quality Assurance Performance Improvement program did not conduct thorough reviews of an adverse occurrence involving a patient who was being considered for withdrawal of life-sustaining treatment when she regained consciousness.” The hospital was cited for the error and inadequate response.

Cause Mapping® Method Applied to the Incident

We can examine the near-miss using a Cause Map™, a visual root cause analysis method, to determine the issues related to the incident. This provides a starting point for developing solutions that would mitigate the risk of a similar incident occurring again and improving healthcare reliability.

It’s important to frame the issue with respect to an organization’s goals:

From the impacted goals, we ask “Why” questions because they allow us to develop the cause-and-effect relationships that led to the issue. For example, for the patient safety impacted goal, the risk for patient death was due to risk of removing her organs. The risk for removing organs exists because the organ removal process had begun. (The investigation found there were no concerns with the organ donation process itself, which indicates the errors were made prior to the donation preparation process.)

Evaluating the System of Causes

The process began because the family agreed to donate organs after the patient was determined to have suffered a cardiac death. In fact, there were a combination of factors that resulted in the patient being incorrectly declared dead, so it’s important to investigate all of them to fully understand the incident and find appropriate solutions.

In this case, the patient was injected with a sedative, which was not recorded in the doctor’s notes. It is unclear who ordered the sedative and why. It’s possible the coma went on longer than usual because the patient was not given activated charcoal to inhibit drug absorption after the staff was unable to place a tube. There appears to have been no additional effort.

The hospital’s evaluation of the patient’s condition before a diagnosis of cardiac death was insufficient. Specifically, the staff performed an inadequate number of brain scans, inadequate testing to determine the drug levels in her body and ignored signs the patient was regaining consciousness. Because details of these issues were not thoroughly investigated, it’s impossible to know whether the protocols in place at the organization were inadequate for determining cardiac death, or whether the protocols were adequate but weren’t followed by the staff.

Determining what changes need to be made to protocols as a result of this tragic, though rare, incident is of utmost importance to reduce the risk of an incident like this happening again. (Please note, the state was unable to find any similar cases in its records, although there have been cases recently reported in other states.)

View a detailed four-page PDF version with the Cause Map™ for this incident by clicking the thumbnail below. 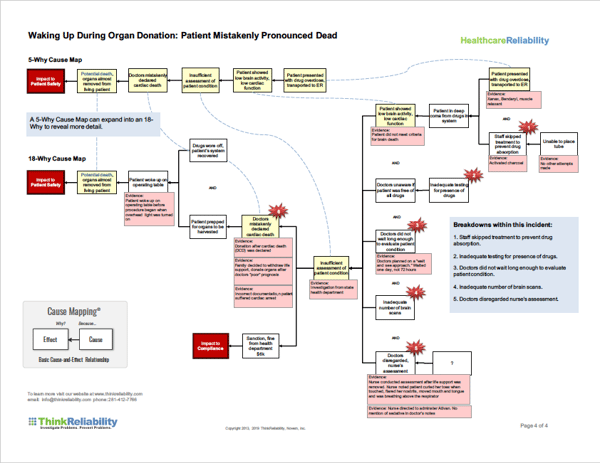 What are your thoughts about this case and our analysis? Are there any details we missed? Please comment below.