The most destructive wildfire ever

The Camp Fire, California’s most destructive wildfire in history, burned in Butte County from November 8 through November 25, 2018, claiming at least 86 lives and causing an estimated $16.5 billion in damage. It burned more than 18,000 buildings, including the majority of the town of Paradise.

The “roots” of the problem

With a tragedy of this scope, the natural response is to want to determine why this happened and to figure out how to prevent a similar incident in the future. A Cause Map, a visual format for performing root cause analysis, can be built to dig into the numerous causes that led to this tragic fire. Creating a Cause Map helps organize information and make cause-and-effect relationships clear. The investigation into the fire is still underway, but an initial Cause Map can be developed to document what is known and then updated as more information becomes available.

Like most instances, there is more than one cause that contributed to this incident, and all the causes need to be understood to develop effective solutions that can be implemented to reduce the risk of future catastrophic fires. To view an intermediate level Cause Map of this root cause analysis example, click on the thumbnail below. 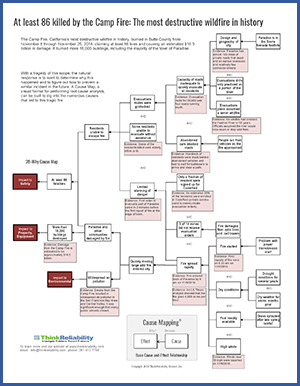 Investigators are still working to determine exactly what started the Camp Fire, but it has been reported in the media that the local electric company detected a problem on a transmission line 15 minutes before the first report of the blaze. Lawsuits allege that a faulty steel ring on a transmission tower resulted in live wires falling and igniting the fire.

While the debate over how the fire started is ongoing, one thing everyone can agree on is that the Camp Fire spread rapidly. Drought over several years and dry weather in the months prior to this fire led to conditions prime for a fire to grow. Grass that had sprouted after a late spring rain dried out over the summer, providing a plentiful fuel source. Mix in high winds and the small fire quickly turned into a raging ember storm.

The Cause Map of this tragedy illustrates that the size and speed of the fire wasn’t the only cause that contributed to the problem. The design and layout of the city of Paradise is also an important factor to consider. Paradise is located in the Sierra Nevada foothills and there are almost 100 miles of private roads that dead-end on narrow overlooks with relatively few streets connecting them. The evacuation route out of Paradise for 38,000 people was four roads running south. Evacuations routes were quickly gridlocked as residents attempted to flee to safety from the approaching fire.

In preparation for a wildfire scenario, community leaders in Paradise had emergency plans and practiced evacuation drills, but the plans assumed an approaching fire would be a tamer wildfire like what the city had experienced in the past. There was no plan for how to evacuate the entire city at one time. The roads out of Paradise were gridlocked within an hour of the first evacuation notice. Three hours later, hundreds of people were trapped by flames within the city.

Additionally, the public alert system was problematic. Not all residents were signed up for CodeRed, a service that provided evacuation orders for the city. Communications were also compromised as fiber optic lines and cell towers were damaged by fire. Many of the residents never received an evacuation order.

Plan for the worst-case emergency

The lessons learned from this root cause analysis example go far beyond city planning. Every organization needs to develop a plan for how to respond to an emergency or natural disaster. Emergency plans are essential for a quick and effective response when a disaster strikes. Planning for common emergencies is useful, but planning for worst-case scenarios is also necessary because sometimes they become reality.

Ready to learn how to break down your own problems? Our 5-Why Online Short Course teaches people to apply cause-and-effect thinking to break down daily issues. This course is for frontline problem solvers, technical leads and management. It’s applicable to safety, environmental, operations, maintenance and administrative functions.