In 2009, Dave Carroll's Taylor acoustic guitar was damaged after it was checked on a flight from Halifax, Nova Scotia to Nebraska. Carroll and his band were traveling to Nebraska for a one-week tour and checked their guitars because the size and shape of the instruments made them difficult to carry on. Carroll claimed he saw baggage handlers throw guitar cases while loading luggage during a layover at Chicago O'Hare International Airport. Once he landed in Nebraska, Carroll discovered his $3,500 guitar had been damaged significantly--requiring a $1,400 repair.

Caroll contacted the airline’s customer service department for compensation, but was unable to get reimbursed for repairing his guitar. The airline, United Airlines, didn’t deny the damage occurred but said he had failed to process his claim within a 24-hour window. Caroll continued to call and email various customer service personnel, and everyone said there was nothing they could do to help him. After nine months, Caroll was given a final “no” from the airline.

Carroll’s frustration must have been inspirational because he wrote a song called “United Breaks Guitars Song 1,” the first in what would become a trilogy of songs about the incident posted on YouTube. The song is catchy, and the video is funny without being too bitter. But under the humor, the memorable lyrics are the stuff public relations nightmares:

“You broke it, you should fix it
You're liable, just admit it.
I should've flown with someone else
Or gone by car
'Cause United breaks guitars.”

After the video reached 150,000 views, United Airlines contacted Carroll and offered to compensate him for the damages. He told them to donate the money to charity, which they did. The airline also called and apologized for the incident and asked permission to use the video for internal training, so they could work on improving their customer relationships.

But the damage to United’s image was done. The media quickly picked up the story of the viral revenge video and the song made national headlines. Carroll was invited to be a guest on radio and TV shows—giving more than 200 interviews during the months after the video was posted.

Bob Taylor, owner of Taylor Guitars, gave Carroll two new Taylor guitars and other props for his second video, which included a product placement—showing that viral videos can also be good for business.

Cause Map™ Diagrams Can Be Updated

A Cause Map diagram, a visual root cause analysis, can be built to capture the causes that led to this incident. The diagram intuitively lays out causes that contributed to an incident to show the cause-and-effect relationships. Cause Map diagrams can also be updated as the problem continues to evolve. In this case, the customer’s solution became the company’s problem. Click on the thumbnail below to view a Cause Map diagram for this example. 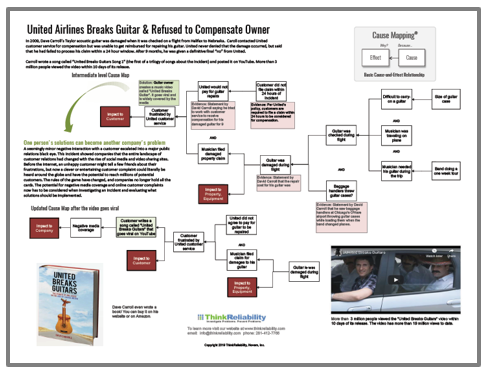 A relatively small incident that began with one impacted customer turned into a large-scale problem that impacted millions of potential customers. The airline was following their internal processes and procedures by not processing a claim that was filed after the 24-hour window of opportunity, but the customer was not satisfied with the proposed solutions (or lack thereof).

Carroll came up with a solution of his own after becoming frustrated with the traditional customer service process for damaged property claims. What may have started as a joke and a way to vent his frustrations proved to be an effective way to solve his problem, because he received two new guitars from Taylor Guitars, and United Airlines responded with an apology and offered financial compensation. The Cause Map diagram could be updated to show his solution became a cause of significant negative media attention that impacted the company and their goals.

‘United Breaks Guitars’ was one of the first customer complaints to go viral. A seemingly minor negative interaction with a customer escalated into a major public relations snafu. This incident showed companies that the entire landscape of customer relations had changed with the rise of social media and video sharing sites. Before the internet, an unhappy customer might tell a few friends about their frustrations, but now, for better or worse, a clever or entertaining customer complaint could literally be heard or seen around the globe with the potential to reach millions of people. The rules of the game have changed, and companies no longer hold all the cards. Now, the potential for negative media coverage and online customer complaints has to be considered when investigating an incident and evaluating what solutions should be implemented.