The Iowa Caucus usually makes headlines because of its unique status as the first state nominating contest in presidential elections, but this election cycle, the chaos of the process, rather than results, took center stage in the media coverage. It took three days for all votes to be reported. The official results and calculation of which candidates would receive pledged national convention delegates from the state was released six days after the election, but there were questions about the accuracy.

In fact, two candidates, Sanders and Buttigieg, requested a partial recanvass (which is basically a review of vote totals). On February 18, 2020 the post-recanvass results were released, but this may still not be the end of the story. On February 19, 2020, Sanders’ campaign said that they would ask for a recount and the Associated Press remained unable to declare a winner based on the available information because Sanders and Buttigieg were effectively tied.

So how did this happen? What made the 2020 Iowa Caucus so controversial?

There were a couple of changes made for the 2020 Iowa Caucus that caused delayed results and general chaos surrounding the process. This was the first time two rounds of voting were going to be announced. Historically, the Iowa Democratic Party has reported the results in terms of state delegate equivalents, but this year, the first allocation and the final allocation were also announced in additional to the state delegate equivalents. This change was made based on new rules established by the national party officials to help improve the transparency of the caucus. The additional information that needed to be reported added a new layer of complexity to the process.

Secondly, this was the first time that precinct chairs were instructed to use an app to report results. Prior to the 2020 caucus, precinct chairs called in results using a telephone hotline. The goal of using the app was to collect results more quickly. It was also initially a goal to use the app to allow voters who couldn’t physically attend a long meeting on a specific night to participate in a virtual caucus which could allow more people to participate, but that plan didn’t pan out in time to support this election cycle.

Issues With the New App

Only 439 of 1,700 precinct leaders transmitted results successfully using the new app. The process to download the app was complicated and required bypassing a phone’s security settings. The app was also only made available to precinct leaders a few days before the caucuses, so there was limited time for training and opportunity to become familiar with it, even if they were able to successfully download it.

There were also errors in the initial results reported by the app. A statement by the company that created the app indicated that there was a software bug in the app. The media has reported that the error likely resulted from a lack of coding expertise at the new and relatively inexperienced company that designed the app.

The development timeframe for the app was also aggressive since it was developed in about two months. There was also limited testing done on the app prior to the caucuses. Testing was intentionally not started until a few weeks before the caucus because of concerns about hacking and cybersecurity.

Problems With the Backup Plan

The backup plan was to report results via a telephone hotline, but that also didn’t go smoothly. The hotline was staffed by about 50 volunteers and had an expected capacity of about 2,000 calls in a 24-hour period. It received more than 8,000 calls. A larger than expected number of precinct leaders started calling the hotline to report results when they were unable to use the app, but they weren’t the only ones calling the hotline. Reporters called into the hotline looking for results and a significant number of President Trump’s supporters called the hotline as well. The hotline number was posted on social media, and it ended up being posted on the 4chan message board with instructions for Trump supporters to "clog the lines.” The result was a mess of long waits and significant delays for precinct leaders trying to report their results.

Lessons to be Learned

A Cause Map™ diagram, a visual root cause analysis tool, can be built to lay out the causes that contributed to this issue and show the cause-and-effect relationships between them. Building a Cause Map diagram can help organize information while providing understanding of the larger picture of an incident.

Reviewing the Map shows that the software bug is a cause of the issues with the Iowa Caucus, but so is the fact that the bug wasn’t identified and fixed prior to the caucus. An error, like a software bug, is a problem that needs to be addressed, but the impact of a technical issue is generally reduced the earlier it is identified.

To view a summary Cause Map diagram of the issues with the 2020 Iowa Caucus, click on the thumbnail below. 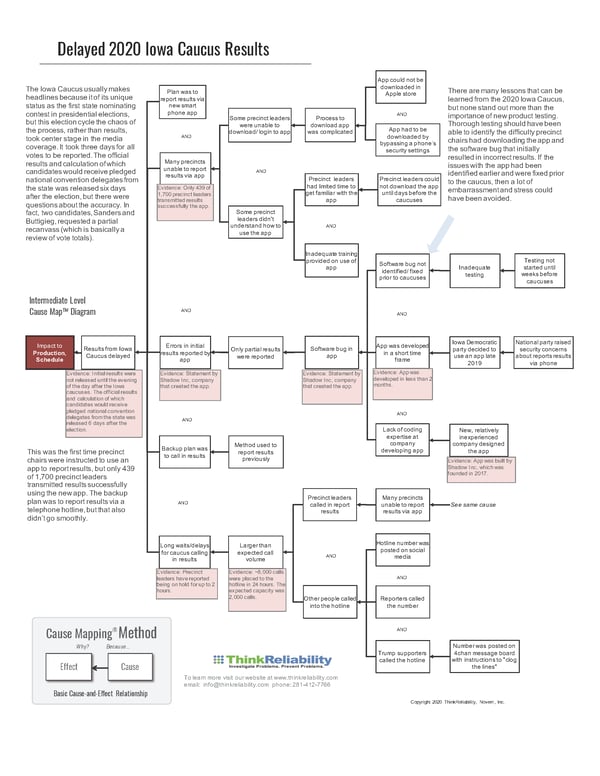 There are many lessons that can be learned from the 2020 Iowa Caucus, but none stand out more than the importance of testing. Thorough testing should have been able to identify both the difficulty precinct chairs had downloading the app and the software bug that initially contributed to incorrect results. If the issues with the app had been identified earlier and were fixed prior to the caucus, then a lot of heart burn, embarrassment and stress could have been avoided.