On June 6, 1889, the largest and most destructive fire in the history of Seattle destroyed 25 city blocks, including the entire central business district, and resulted in the death of one person. The cost of the property damage was estimated at as much as $20 million, which is around $697 million in today’s dollars. The city was rebuilt quickly, on top of its ruins, but the fire dramatically reshaped the city and led to several significant improvements in fire safety. In this case study, we use the Cause Mapping® method of root cause analysis to illustrate how a complex incident, like the Great Seattle Fire, can be analyzed to better understand what happened and reveal additional solution options.

So, what’s the problem? For this example, we’ll use a Cause Map™ diagram, a visual format for performing a root cause analysis, to analyze the causes that contributed to the Great Seattle Fire. The first step in the Cause Mapping® method is to fill in a problem outline for the incident. The top half of the outline captures the basic background information, such as the date, time and location. The bottom half of the outline is used to document the goals that were impacted. An outline filled in for the Great Seattle Fire may look like this:

For this example, we will start at the impact to the property goal. So, why were 25 city blocks destroyed? Because fire spread between buildings after one building was engulfed in flames. The first building burned after a small fire spread to the floor when burning glue fell onto the floor. Asking these Why questions starts to paint a picture of what happened, but it is still missing detail that is needed to understand what caused the Great Seattle Fire.

One of the 5-Why Cause Map diagrams for the Great Seattle Fire may look like this:

Asking five Why questions is a good starting point and a simple way to start an investigation, but these five causes show just one perspective of the incident. With the exception of the simplest incidents, you'll need to continue asking questions and expand the Cause Map diagram. The more causes revealed, the more opportunities for solutions you'll have.

As you read the Map, you’ll notice when more than one cause contributed to an effect, the causes are listed vertically and separated by an “and.” For example, the small fire spread to the floor because burning glue spilled onto the floor AND a fuel source (in the form of wood chips and turpentine) was on the floor. Add more detail until a complete picture of what caused the incident is intuitively laid out with all of the cause-and-effect relationships captured. Eventually, all of the impacted goals will be added to the Cause Map diagram and all of the relevant information captured. See a larger, 16-Why Cause Map diagram below to see how it begins expand as detail is added. Click on the thumbnail to view and download a printable one-page PDF of the Map. 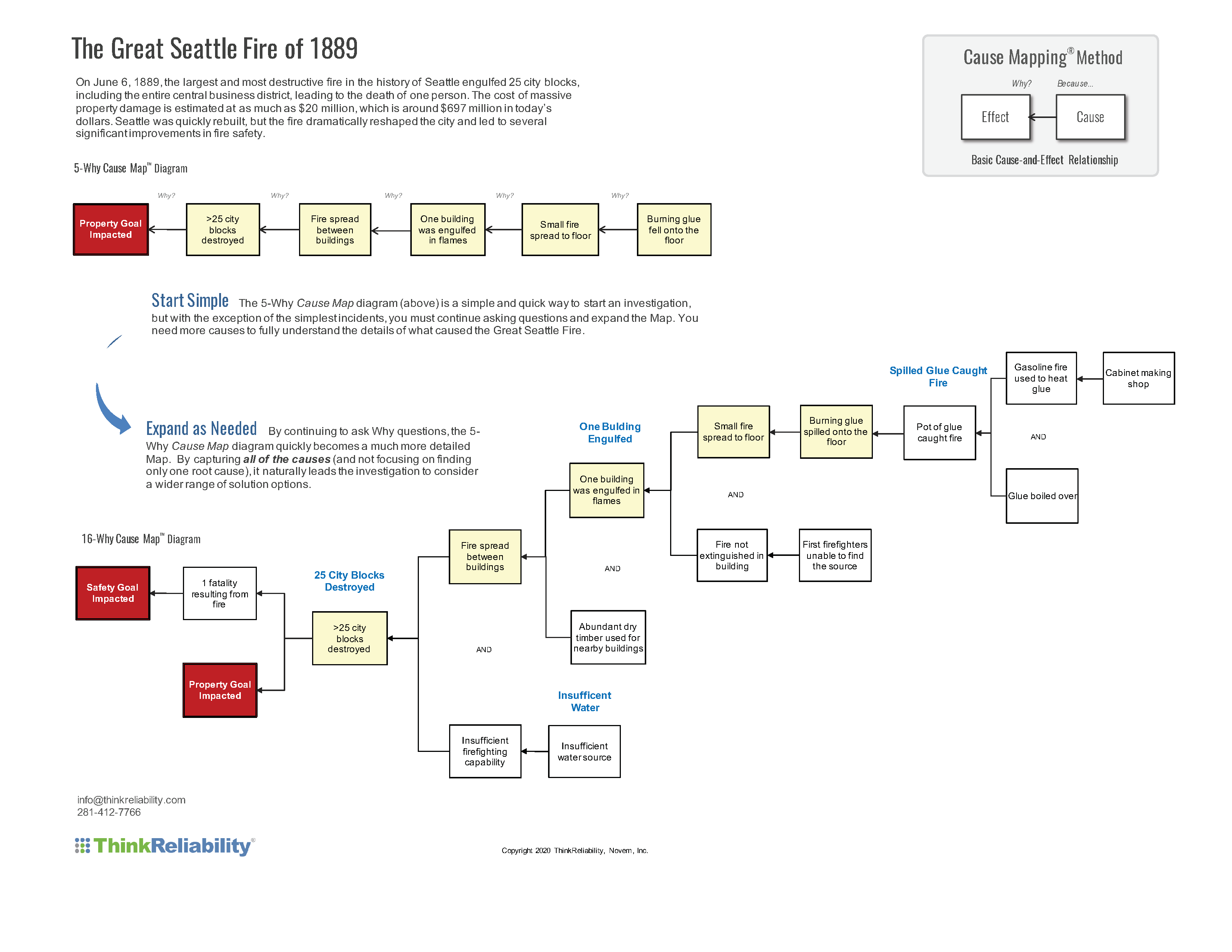 The expanded Cause Map diagram shows more information than the smaller 5-Why and gives us a much clearer picture of what caused this event.

By capturing all of the causes and not focusing on finding only THE root cause, it naturally leads the investigation to consider a wider range of solutions. Solutions that focus on preventing a fire from igniting in the first place can be considered, along with solutions that slow down the spread of fire between structures and ways to increase firefighting capability. In this example, Seattle banned wood buildings to reduce the risk of fire spreading between building. The city also created a professional firefighting department, added more fire hydrants, replaced wooden pipes and improved the design and infrastructure of the city-operated water supply.

It is easy to take modern fire safety practices for granted, but the improvements that communities have made to reduce the risk of large fires were often learned as a result of a disaster. As time went on, other cities learned from fires like the Great Seattle Fire of 1889 and improved their fire safety practices without having to suffer from a similar tragedy. Learn more about the Cause Mapping method of root cause analysis in one of our upcoming webinars, online short courses or online workshops.