Nearly everyone recognizes the smell of natural gas.  That distinctive rotten egg odor alerts you to check that gas burners are turned off or lit when you’re cooking, or to get everyone out of the building if the source isn’t readily apparent. In this case study, we'll take a look back at a historical event that has had a significant impact on today's world.

What you may not know is that natural gas is actually odorless and colorless.  That distinctive smell comes from methyl mercaptan.  Methyl mercaptan is a flammable, colorless gas that has a distinctive putrid smell.  It’s added to commercial natural gas so that people can identify leaks, even very small ones.

Methyl mercaptan hasn’t always been added to natural gas.  Like most safety upgrades, the status quo was changed after the need for improvement became tragically evident.  In the case of adding an odor to make gas leaks easier to detect, the New London School explosion was a tipping point.  On March 18, 1937, an estimated 294 people, mostly students, were killed and hundreds were injured when the New London Junior and Senior High School in Texas was leveled by a huge explosion.

In this video, we step through the building of the Cause Map, starting with a 5-Why for the New London TX School Explosion Cause Map:

Looking at the root cause analysis

As with any incident, when a root cause analysis is done, there are always multiple causes.  To reduce costs, the school had tapped into a nearby raw natural gas line for heating.  Raw natural gas was considered a waste product of oil drilling, so the oil companies turned a blind eye to the practice which was widespread in the region.  The design of the school also played a role in the explosion.  The school was built on a gentle slope with a 2 to 6 foot void under length of the building  A leak developed and natural gas filled the void space.  Students in some classrooms had reported headaches and burning eyes days before the disaster, but no one made the connection that natural gas collected under the school. 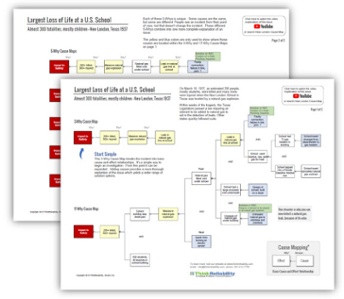 Unaware of the danger, a shop teacher turned on an electric sander which is believed to have provided the spark that ignited the gas.  The force of the explosion collapsed the main wing of the structure and lifted the roof off the building before it crashed back down. 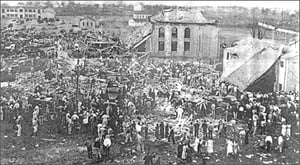 This tragedy remains the worst catastrophe to occur inside a school in American history.  Within weeks of the New London School explosion, the Texas Legislature passed a law requiring an odor to be added to natural gas to aid in the detection of leaks. Other states quickly followed suit.  Every person who has said, “I think I smell natural gas” has benefited from the legacy of that tragedy.

As with any disaster, there are lessons that can be learned.  Adding an odorant to natural gas has saved countless lives.  But the application of the lessons highlighted by this explosion shouldn’t stop there.  The idea of designing in ways to alert people of potential danger is relevant across industries.  After all, it’s difficult to mitigate the danger you don’t even know is there.