The importance of testing: Issues with the Mark 14 Torpedoes 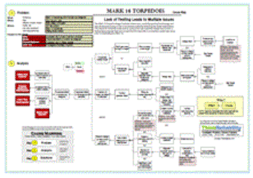 The problems with Mark 14 torpedoes at the start of World War II are a classic example that illustrates the important of robust testing.  The Mark 14 design included brand new, carefully guarded technology and was developed during a time of economic austerity following the Great Depression.  The desire to minimize costs and to protect the new exploder design led to such a limited test program that not a single live-fire test with a production model was done prior to deploying the Mark 14.

The Mark 14 torpedo design was a step change in torpedo technology. The new Mark VI exploder was a magnetic exploder designed to detonate under a ship where there was little to no armor and where the damage would be greatest.  The new exploder was tested using specially instrumented test torpedoes, but never a standard torpedo. Not particularly shocking given the lack of testing, the torpedoes routinely failed to function as designed once deployed.

The Mark 14 torpedoes tended to run too deep and often failed to detonate near the target. One of the issues was that the live torpedoes were heavier than the test torpedoes so they behaved differently.

Importance of identifying issues during testing

The early technical issues of the Mark 14 torpedoes were eventually fixed and the torpedo went on to play a major role in World War II.  Mark 14 torpedoes were used by the US Navy for nearly 40 years despite the early issues.  But there is no doubt that it would have been far more effective and less painful to identify the technical issues during testing rather than in the field during war time.  There are times when thorough testing may seem too expensive and time consuming, but having to fix a problem later is generally much more difficult.  No one wants to waste effort on unnecessary tests, but a reasonable test program that verifies performance under realistic conditions is almost always worth the investment.  And provides easy justification of the importance of testing.

Click here to view a high level Cause Map of the early issues of the Mark 14 torpedoes.

You can also learn more about the torpedoes by clicking here and here.

To learn how to create a Cause Map for one of your issues, attend an upcoming Public Workshop: