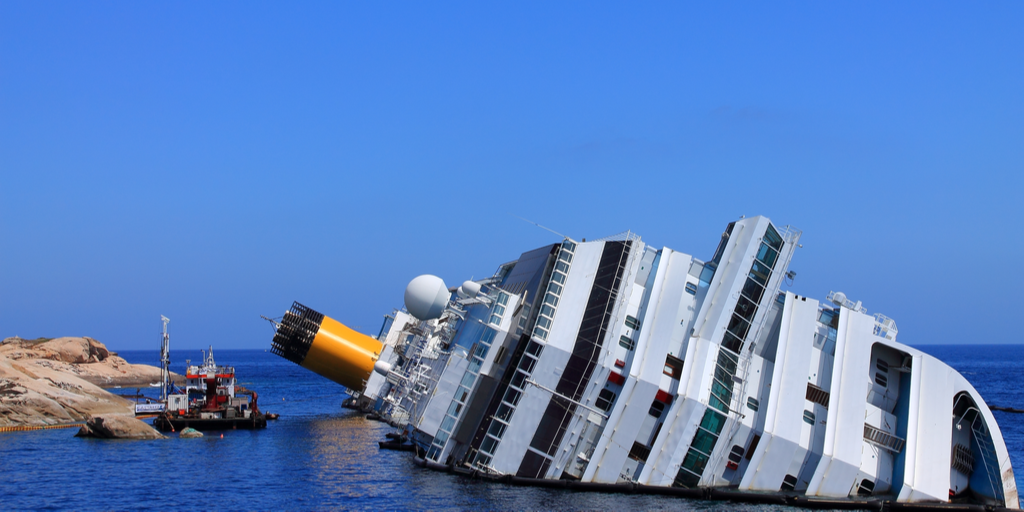 Righting the Ship: Building a Process Map for the Costa Concordia Salvage

In January 2012, the cruise ship Costa Concordia ran aground off the coast of Italy. The ship grounding had immediate, catastrophic impacts, including the death of 32 people. In addition, it had an environmental impact, having polluted the water with fuel, sewage and other hazardous materials stored aboard the ship.

It was determined that the best way to minimize the leakage from the ship would be to return it upright and tow it to port, where the onboard waste could be emptied and disposed of, and then the ship broken up for scrap.

This Calls for a Process Map

Because a salvage operation of this magnitude (due to the size and location of the ship) had never been attempted, careful planning was necessary. Processes like this salvage operation can be visually broken down using a process map, which diagrams and breaks out the steps that need to be taken for a process to be completed successfully. This mapping can be done at varying levels of detail, depending on how reliable the process needs to be moving forward.

A process map should not be confused with a Cause Map™ diagram. A Cause Map diagram breaks down the cause-and-effect relationships within an incident to analyze and understand an incident’s effects and why it happened. Using the Costa Concordia example, a Cause Map diagram begins with the impact(s) to the goals—in this case, the fatalities and environmental impacts—and asks Why questions to understand the details of the incident that led to those effects. The investigation works backward through time. Conversely, a process map reads from left to right along moving forward through time—starting from step 1, moving to step 2, and continuing forward chronologically.

In fact, in many cases, understanding processes by building a process map can act as part of the analysis step of an incident investigation. By evaluating the steps of a process, you can see which steps in the process did not go well. Or, process maps can be developed as solutions to problems by providing and showing how a process should be implemented to avoid a similar incident occurring in the future.

For the Costa Concordia, we can use a process map as a solution. How to remove the ship while minimizing further damage and pollution is a process that can be mapped and applied as a solution. Salvaging the ship was not an easy task. Because of the hazardous substances on board and the belief that two bodies were still trapped under or inside the ship ruled out the more standard solution of blowing the ship up or taking it apart on-site.

The first step of this process was to upright the ship. More than a year and a half after running aground, on Sept. 16, 2013, the ship was lifted upright, called “parbuckling,” after having been on its side for 20 months. This task, the first step in the salvage process, took 19 hours, involved 500 crewmembers from 26 countries and cost nearly $800 million.

A detailed process was developed to prepare for leakage with oil booms that held sponges and skirts, then installed an underwater platform and 12 turrets to aid in the parbuckling and hold the ship upright. The ship was winched upright using 36 cables and was held steady on the platform with computer-controlled chains until the ship was floated off the platform and delivered to Sicily where it was taken apart and its pieces recycled.

To view the process map in varying levels of detail, please click the thumbnail below. 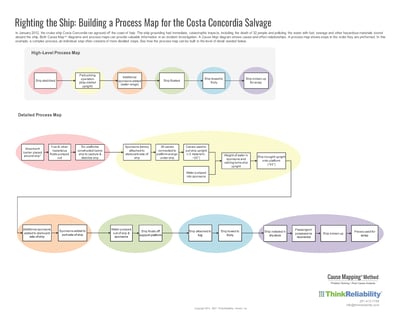 For more information about process mapping and how it fits into your root cause analysis investigations, check out our on-demand short course offerings, including Process Mapping 101.