Many people know about the crash of the Hindenburg and have even seen photos or video of the airship’s fiery demise, but have you heard of the USS Akron?  The Hindenburg crash was a terrible disaster that claimed 35 lives in 1937, but the deadliest airship crash occurred four years earlier when the USS Akron crashed into the Atlantic Ocean and sank, killing 73.

The Akron was a rigid helium filled airship operated by the US Navy between 1931 and 1933. The Hindenburg was slightly larger, but the less well-known Akron was nearly as large. Check out our root cause analysis case study on the event and how the cause-and-effect relationships build out in a Cause Map.

On the evening of April 3, 1933, the Akron cast off from her mooring mast for a routine mission to assist in calibrating radio direction finder stations. The airship soon encountered stormy weather of unexpected strength. A little after midnight on April 4, the Akron was caught by an updraft that was quickly followed by a downdraft.  The crew attempted to stay at a safe altitude by increasing speed and dropping ballast, but they were unable to control the airship and the nose rose while the tail rotated downward.  The downdraft continued to force the airship lower.

Efforts to control the airship were complicated by inaccurate altitude readings. The barometric pressure was lower in the storm which affected the instrumentation so that the actual altitude flown was lower than the indicated altitude. The crew was unaware of how close the tail of the airship was to the ocean surface because the nose of the airship had tilted upward (between 12 degrees and 25 degrees) and the altitude indication was inaccurate.

Crashing into the ocean

While the control gondola was still hundreds of feet high, the lower fin of the Akron hit the ocean surface and was ripped off. The airship quickly broke up and sank. A nearby merchant ship saw the lights of the airship descending toward the ocean and altered course to investigate.  They pulled the only 3 men of a crew of 76 who survived. Most casualties were caused by drowning and hypothermia.

There were no life jackets on-board the Akron when it crashed. Additionally, there was only one rubber raft on-board that the crew did not have time to deploy. The safety gear had been transferred to another airship and had not been replaced. 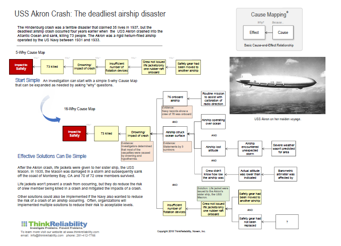 While few of us have ever ridden in an airship or will in our lives, there are still several important lessons that can be learned by studying this disaster. Like most large failures, there were warning signs of trouble before the tragedy occurred. There were at least three accidents during the USS Akron’s short career that indicated the potential for issues when attempting to control a large helium filled airship.

Similar to the Titanic, the lack of basic safety gear on-board played a deadly role in the accident. The potential for issues should not have been a complete surprise and yet the Akron was operating over the ocean with no life jackets on-board. Life jackets would not prevent the incident from occurring, but they would have helped mitigate the impacts of it. The relatively simple step of issuing life jackets and requiring the crew to wear them during storm conditions would have likely saved many lives.

After the Akron crash, life jackets were given to her sister ship, the USS Macon. In 1935, the Macon was damaged in a storm and subsequently sank off the coast of Monterey Bay, CA. The story may sound similar, but it has a different ending because 70 men of the crew of 72 survived. To be fair, the conditions were milder and significantly warmer where the Macon crashed, but the results are still devastating.

Tragedies like the Akron crash are good reminders of the importance of safety equipment and emergency response plans. No one plans to crash or fail, but accidents occur. No individual or organization really want to consider worst case scenarios, but it is important to be as realistic as possible about potential problems so that steps can be taken to prevent problems or at least mitigate the impact of them. Having the right safety gear and emergency training can save lives when the unexpected occurs.