On March 11, 2018, a sightseeing helicopter made an emergency landing in the East River in New York City.  The pilot survived, but the five passengers drowned when they were unable to escape the submerged helicopter.  This tragedy is a combination of several different factors.  Any one of them on their own would not have produced the incident, but together resulted in tragedy.  This is an important aspect of root cause analysis.  It’s what James Reason would cite as his Swiss Cheese model.  The holes in the cheese all align where a straight line passes through each slice.  To prevent the incident just one slice needs to be misaligned.

The pain for the families and friends who lost loved ones is unfathomable.  It’s frustrating to review how many things went wrong on what should have been a routine 30-min flight.  The National Transportation Safety Board (NTSB) is conducting a thorough investigation of this issue.  They’ll identify in detail what happened and why to prevent similar incidents from occurring in the future.  This root cause analysis example uses information from the NTSB preliminary report.  Our cause-and-effect analysis starts with a simple 1-Why then builds into a 5-Why, a 15-Why and eventually a more detailed 30-Why Cause Map.  And just like a map of your town, each of the different Cause Map levels is accurate.

I’m going to highlight four areas of this tragedy - harnesses, flotation system, water landing, and engine failure.  Each one begins with a straight-line cause-and-effect analysis.  These four different analyses will combine into one complete explanation containing all the information available to date.  Once the NTSB investigation is finished, additional detail will be added to the Cause Map.

SUMMARY VIDEO OF CAUSE MAP OF NTSB FINDINGS

The passengers were unable to quickly escape because they were wearing fall protection harnesses.  This was a “doors off” flight where passengers could sit on the edge of the helicopter with their feet hanging over New York.  The fall protection harnesses were intended to prevent passengers from falling out of the helicopter.  However, in this incident, they are causally related to the passengers being trapped underwater.  It’s a tragic example of unintended consequences.  A solution to prevent one problem inadvertently created a different one.

The pilot was not wearing a fall protection harness.  He was able to release the buckle on the standard seat belt, which allowed him to escape the helicopter as it turned over in the water.

5-Why Cause Map™ – Harnesses

Unlike a commercial airplane, most helicopters do not have pressurized cabins.  If a helicopter lands in  water, it then sinks.  Because of this, helicopters that fly over water are required to have a flotation system – either fixed utility floats or emergency floats attached to the landing skids that inflate from pressurized cylinders.  This helicopter had three emergency floats on each side.  In the video of this incident, the floats on the right side of the helicopter don’t appear to fill properly.  The helicopter landed squarely in the water but quickly rolled to its right side.  If the floats had inflated evenly, keeping the helicopter upright on the water, the passengers may have had sufficient time to remove their harnesses.

The helicopter landed in the East River because the pilot decided to move away from populated Manhattan after he lost power over Central Park.  The concern may have been to avoid the risk of casualties on the ground.  The pilot may have thought a water impact would be more cushioned and the floats would keep the helicopter upright, at least temporarily.

What’s amazing about a helicopter's design is that in an emergency situation, they can land without power.  During powered flight, the blades push air downward giving the helicopter lift.  When an engine failure occurs the helicopter begins falling.  Air now flows up through the blades which turn the rotor to slow the falling helicopter.  This is called auto-rotation.  Single engine helicopters are required by the Federal Aviation Administration (FAA) to be able to land in auto-rotation.  There are some auto-rotation videos in the link below.

This helicopter auto-rotated toward the East River.  An engine failure involves split-second decisions, but there may have been an option for an auto-rotation landing in Central Park.  There are several ball fields and large open areas and in the park.  The Central Park option may be only clear in hindsight.  There may have been other factors the pilot considered in that instant. 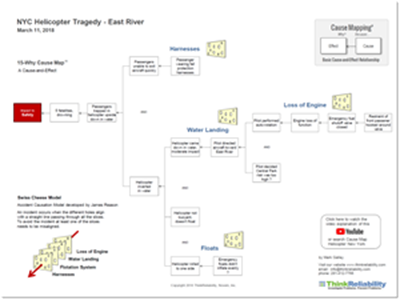 People tend to be surprised to learn that a helicopter is designed to land safely with an engine failure.  Watch an autorotation landing of the same model of the helicopter, an AS350 (time is 2:50). This is another training video of a student performing an autorotation (time is 1:08). Read here about the basics of autorotation on the Wikipedia page.

As soon as the engine lost power, the pilot radioed a distress call indicating an engine failure.  He began auto-rotation toward the river.  One of the steps when performing an emergency landing is shutting off the fuel just before touchdown.  As the pilot approached the water he found the emergency fuel shutoff lever already in the OFF position.  The lanyard of the front passenger's harness was underneath the lever.  He positioned the fuel shutoff lever back to the ON position.  The engine began responding, but not quickly enough, so the pilot turned the fuel back off before contacting the water.

In the initial NTSB interview, the pilot reported the front passenger slid sideways and leaned back to take a picture of his feet outside the helicopter.  The lanyard on the fall protection harness may have hooked on the fuel shutoff lever.  At this point in the flight, the pilot heard a low rotor RPM in his headset and observed the warning lights for fuel and engine pressure.  The fall protection harness was intended to mitigate the risk of someone falling out of the helicopter, but instead, it appears to be causally related to both the loss of the engine (fuel supply) and the five passengers being trapped underwater.

This is not the first fatal accident for this model of helicopter where a passenger inadvertently interfered with the fuel controls to the engine.  See the timeline in the video summary.

The two-page PDF shows how the different linear Cause Maps can be combined into one, complete analysis.  Each cause of this incident had to happen.  They all contributed.  One cause on its own would not have produced this disaster.  But changing just one changes the outcome.  That simple point is missed within most root cause analysis investigations.  Most companies become fixated on the “root cause” and miss other viable solutions.  It’s important for organizations to understand the options for mitigating risk within their operations.  See the Straw that Broke the Camel’s Back.

Notice that an incident with 15 causes doesn’t need 15 solutions.  A more detailed analysis is essential to thoroughly understand how and why a complex issue occurred so that the best solutions can be found.  The purpose of an investigation is to provide a complete explanation to identify specifically what needs to be done to minimize risk going forward. 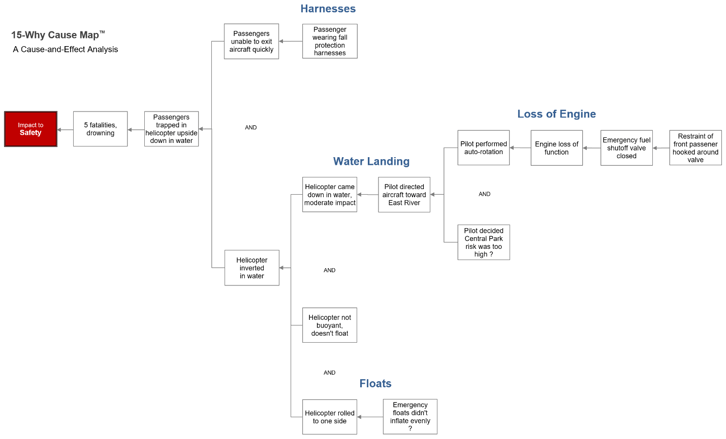