On September 12, 2008, a commuter train and a freight train collided head-on in the Chatsworth district of Los Angeles, killing 28 and injuring more than 100. The crash was the worst train accident in 15 years and taxed emergency resources. The accident made national headlines and raised many questions about the safety and reliability of the nation’s rail system. A root cause analysis case study of this accident can help us understand what caused this accident and its aftermath.

A Cause Map, a visual root cause analysis

A Cause Map is a visual root cause analysis that intuitively lays out the causes that contribute to an issue and shows the cause-and-effect relationships. The first step in the Cause Mapping process is to define the problem and we do this by filling out an outline with the basic background information as well as how the issue impacted the goals. A simplified example of a completed Outline for this root cause analysis case study is below.

Once the Outline is filled in, the Cause Map is built by starting at one of the impacted goals and asking “why” questions. Any of the goals can be used as a starting point, but all the goals should eventually be added to the Cause Map. The Cause Map is expanded until all relevant information is captured. Click on the thumbnail below to see an intermediate level Cause Map for this root cause analysis case study. 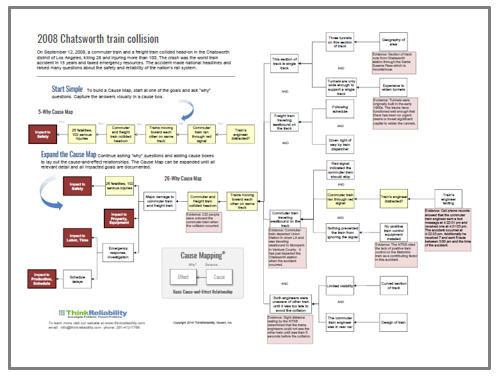 The National Transportation and Safety Board (NTSB) investigated this train collision. You can read the full report here. The investigation team determined that the freight train had the right of way and that the commuter train had traveled through a red stop signal. A red signal is common in this location because it is single track. There are three tunnels that are only wide enough to support one train so the trains moving in opposite directions take turns. The track was originally built in the early 1900s and it would be very expensive to widen the tunnels.

The NSTB determined that it is likely that the train engineer was texting and was distracted when the commuter train passed the red signal. Cell phone records showed that the commuter train engineer text a message 4:22:01 pm and received one at 4:21:03 pm and the accident occurred at 4:22:23 pm. Additionally, the engineer received 7 and sent 5 texts between 3:00 pm and the time of the accident.

Additionally, both engineers were unaware of the other train until it was too late to avoid a collision. There is limited visibility on this section of track because it is curved. Sight distance testing by the NTSB determined that the trains engineers could not see the other train until less than 5 seconds before the collision, which is not enough time to brake and prevent the accident.

One of the most important findings by the NSTB was that installation of a positive train control (PTC) system could have likely prevented the accident. A PTC system monitors and controls train movements and would have automatically braked the commuter train when it passed the red stop signal.

Could it happen again?

There were many lessons learned in this incident. The nation is working on improving the safety of the rail system to prevent similar accidents, but it is still very much a work in progress.

As a direct response to this accident, Congress passed the Rail Safety Improvement Act of 2008, requiring Class 1 Railroad mainlines with regularly scheduled intercity and commuter rail passenger service to fully implement PTC by December 31, 2015. Unfortunately, few railroads met that deadline to implement PTC stating that the technology was too complicated and not fully developed. The timeline was extended to December 31, 2018, with a provision to extend the deadline to December 31, 2020 if PTC implementation plans were submitted by end of 2018.

The commuter railroad that was involved in 2008 Chatsworth train collision, Metrolink, was the first commuter system to deploy PTC technology and it is fully active on the 341 miles of track owned by the Metrolink. There are 171 miles of Metrolink track that are owned by freight lines and they are reported to be working towards installing PTC.

How much is safer worth?

Few of us probably work in the rail industry, but there are many lessons that can be learned from studying the Chatsworth collision and PTC. In this root cause analysis example, a single error by one individual resulted in fatalities. Ideally, all work processes would be built with enough redundancies that a single point failure, whether it be an operator missing a signal, a component failure or a software bug, would be caught and corrected before anybody gets hurt.

Adding redundancy and safety improvements costs both money and time and attempting to add layers of safety can add complications. Every organization has to weigh the options and decide what level of risk is acceptable and how many resources are appropriate to put toward improving safety and reliability. It isn’t always an easy call but studying past accidents and learning from them can help provide some guidance.