Mapping out the causes

On the afternoon of October 6, 2018, a modified SUV limo crashed in Schoharie, New York resulting in 20 fatalities.  The limo was transporting 17 passengers when it failed to stop at a stop sign at a T-shaped intersection.   After passing through the intersection, the limo struck two pedestrians before hitting a parked vehicle in a parking lot. All 17 passengers, the driver and two pedestrians that were hit died. This accident was the deadliest road transportation disaster in the US since 2005.

The investigation into this accident is ongoing and there are many questions that need to be answered to fully understand the accident, but quite a bit of information has already been collected. Managing an ongoing root cause analysis investigation requires organizing a large amount of information and it is important to track all of the possible causes as well as the evidence that supports or refutes them as the investigation progresses.

Using the Cause Mapping Template to document an investigation

Our Cause Mapping template is a free tool that can be used to document all the information associated with the investigation in one location. The Cause Mapping Template is built in Excel and does not require any additional software.  A Cause Map is a visual format for performing a root cause analysis that intuitively shows the cause-and-effect relationships that contributed to an issue.

The Cause Mapping Template includes a worksheet with causes boxes and connectors that can be copied to build a Cause Map. It includes another worksheet with a blank Outline that can be used to define the problem as well as worksheets to save photos, system diagrams, notes and any other supplemental documents that are needed to support the investigation. 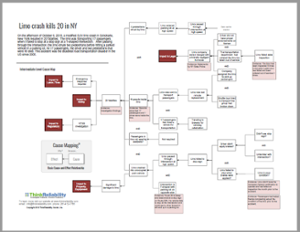 So, what caused the accident?

The National Transportation and Safety Board is currently investigating this deadly accident. They have not released an official report yet, but media has reported several areas of interest that are being investigated as part of the inquiry into this accident.

New reports have also questioned the safety of the limo involved in this crash. The transportation department had ordered the limo be taken out of service multiple times prior to the accident because it had failed several inspections. Media reports have stated that the limo failed an inspection the previous month because it did not have the required federal certificate to operate, mechanical issues such as a hydraulic anti-lock brake warning indicator light that stayed on, a dangling brake line and defective windshield wipers. Investigators will certainly look into the condition of the vehicle and whether there were any deficiencies that may have played a role in accident.

This accident has also raised questions of the safety of these types of limos in general. Stretched SUV limos like the one involved in the accident are created by modifying an SUV after manufacturing. They are not subject to the same safety regulations and testing as passenger cars. Investigators will look into whether the crash safety design of stretched vehicles is sufficient.

At the time of the accident, the limo driver did not have the required endorsement on his license to carry 15 or more passengers. In addition to working to understand the required paperwork, investigators also typically try to determine if the driver had consumed any drugs or alcohol that may have impaired their reactions whenever an accident like this occurs.

Then what is THE root cause?

So what is the root cause of the limo crash?

Many people want to know what THE root cause (singular) of an accident is. What was the ONE thing that caused the accident? At ThinkReliability, one of our fundamental beliefs is that a complete root cause analysis investigation identifies the system of causes (plural) that contributed to an incident instead of looking for ONE root cause. Our Cause Mapping Template is a tool that can help investigators build a Cause Map that shows all of the causes that contributed to an incident.

The final investigation findings for this limo crash are not available yet, but they will likely include a number of recommendations for improvements that could reduce a similar accident from occurring. Modifications to the intersections could reduce the likelihood of a vehicle running into the park lot. Maybe there are design improvements that could be made to similar stretched SUV limos to improve their safety performance when involved in a crash. Maybe an enforcement of the failed inspection items could be increased to ensure that vehicles that are ordered out of service are in fact taken out of service.

By focusing on ALL the causes that contributed to an incident, the pool of possible solutions that is considered to reduce the risk of future accidents is naturally increased. When you work to identify ONE root cause, you often only develop one solution to address it. Considering a larger number of diverse solutions gives an organization more options to efficiently reduce the risk of a similar accident from occurring.