Chances are high that you’ve used a checklist before. Whether it was purchasing school supplies, following a recipe, or checking off a to-do list, a checklist is a seemingly simple, yet highly effective tool.

The Air Combat Command outlined the history of checklists in Air Force operations, which dates back to the 1930s. Just over 90 years ago, on Oct. 30, 1935, the Air Corps was performing a demonstration flight for the prototype of Boeing’s Model 299 B-17, known as the “Flying Fortress.”

The test pilots pushed the engine controls to full power, but as the plane began to climb, its nose pitched. “With its engines at full power, the bomber entered an alarmingly steep climb and stalled a few hundred feet above the ground. It performed a graceful half-pirouette and pointed straight back to the ground,” the Command noted.1 The investigation concluded the crash, which killed two of five crewmembers, was pilot error. The new aircraft had control locks in the cockpit that pilots simply forgot to unlock.

Pilots are an excellent example of the effectiveness of checklists. There are more than four checklists that the cockpit crew goes through before any flight on a Boeing 737 today. Following the tragedy, the flight manual used during WWII stated that it’s “absolutely essential that the cockpit checklist be used properly by pilot and co-pilot at all times.”

I am a firm believer in checklists. In fact, checklists are one of the four key communication tools I discuss in Cause Mapping workshops. Others include training programs, procedures, and work processes. Despite using checklists, I once had a “user error” when I was traveling. The stakes in my example weren’t anywhere near as high as with flying a plane, but let’s dissect the incident.

I conduct Cause Mapping workshops and training sessions on root cause analysis professionally, and I’m an avid scuba diver in my free time. Sometimes my personal and professional life intersect, and I can leave a day or two early and dive before I conduct a workshop.

My packing checklist for a workshop has over 80 items, ranging from putting a fresh package of post-it notes in my bag to verifying my rental car and ensuring I have aspirin for the trip. Combined with my scuba dive checklist, there are nearly 200 things that need to be packed.

In my real-life example, when I arrived at the airport for a workshop and scuba trip, I realized I had forgotten my wallet and my identification, which are required to board the plane. In conducting root cause analysis, it’s important to think about the impact on the goals. In this case, it almost impacted the diving portion of my trip. I was flying a day before the workshop and diving with decompression and air travel considerations can make things tricky. The error could have resulted in missing my flight and/or having to cancel the dive portion of the trip.

Prior to this, the last time I had left my wallet at home was nearly a decade earlier. Estimating that I take out my wallet three times per day, that put my error rate somewhere around 1/10,000. It’s not bad, but it’s not perfect.

It would be easy to say I left my wallet at home because I wasn’t paying attention. In terms of solutions, though, that’s not much help.

The reality is that 'Bring your wallet' wasn’t on my checklist. Below is what a Cause Map™ diagram could look like of my incident: 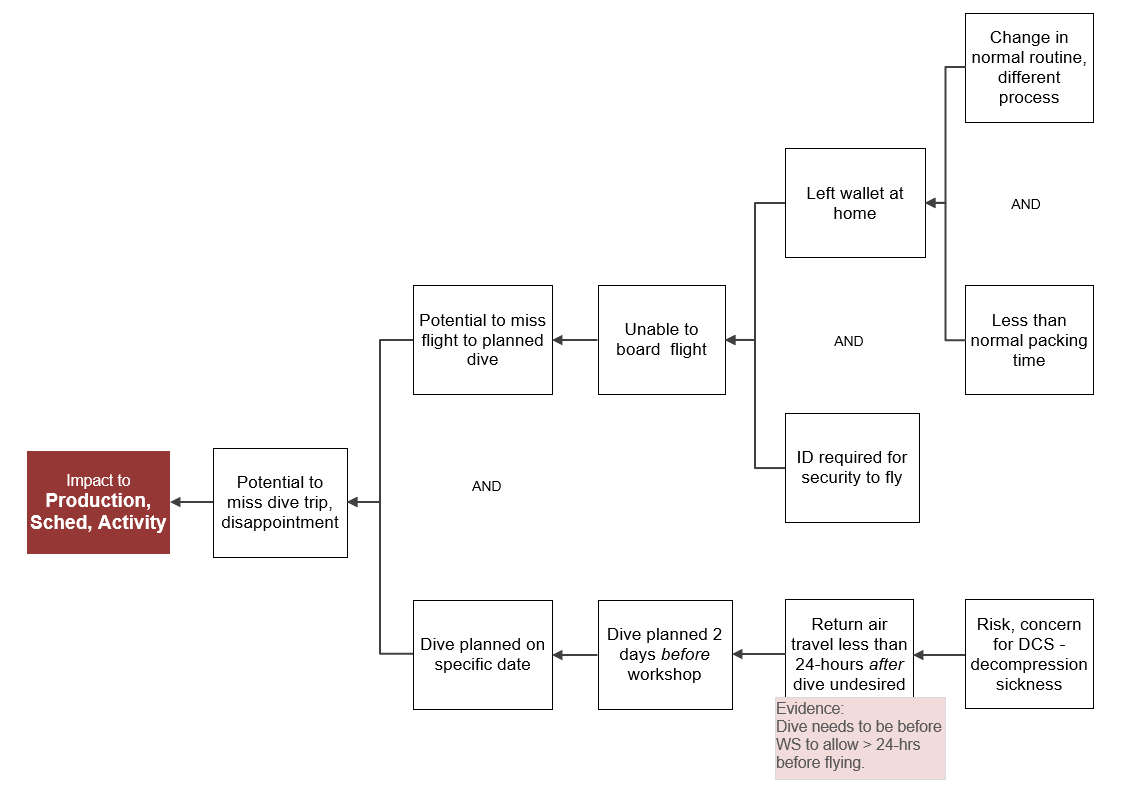 By following the top path, you can see that there were a number of things that had to happen for me to forget my wallet. I didn’t take as much time as normal while packing and I was distracted.

The more you drill into a cause, the more solutions will emerge. For example, by looking more closely at the distractions, it’s notable that I chose to pack the day of the trip and I had promised to launch rockets with my children before leaving. To top it off, I was transitioning to a new checklist system. 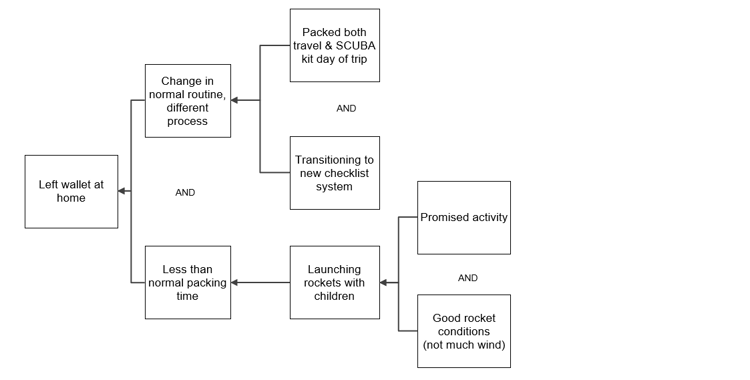 Not every cause on a Cause Map visual representation needs to be addressed but implementing multiple solutions can help reduce the risk and likelihood of a recurrence.

Potential solutions could include:

In this instance, I chose to do all the above: packing earlier, ensuring activities planned for travel days aren’t too long, and combining my wallet with my phone in a single case. 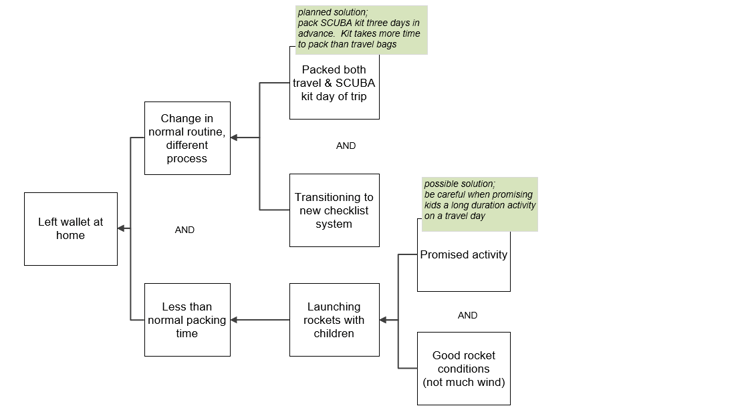 My story has a happy ending. My wife brought my wallet to the airport and any severe consequences, like missing my flight and having to reschedule the workshop or having to skip the diving portion of the trip, were avoided. Because of the process improvements I made, I haven’t forgotten my wallet since.

Effective Use of Your Systems is Key

Checklists are wonderful tools when used effectively. Your checklist must be clear and simple to use, and it must be used diligently. Shortcutting your checklist will invalidate the philosophy and effectiveness.

For a more in-depth look at this scenario, view our full Cause Map diagram. 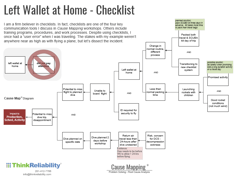 If you’re interested in learning more about checklists as part of your company’s daily operations, check out or register for our Checklists Basics webinar.